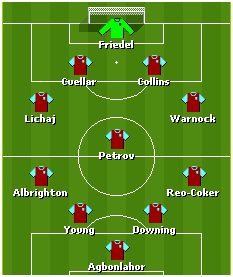 Friedel remains one of the more consistent Goalkeeper’s in the Premier League and will present a significant obstacle for Chelsea to overcome. Rarely found wanting, he is decent on crosses and a good shot stopper. His issue remains the amount of times he is tested during a game; Aston Villa tend to allow several clear-cut chances during a game, an indicative symbol of their current League position.

Collins and Cuellar have become Houllier’s preferred pairing in the heart of defence, replacing Dunne. Collins is an immobile choice at the back, while Cuellar’s style is both haphazard and clumsy at best. They are still very much a pairing in development and have been exposed at times this season, with the performance against Arsenal particularly poor.

Warnock remains a steady, if unspectacular, player who provides little attacking impetus for a modern full-back, whereas Lichaj is a player I feel is quite a promising full-back with a Rory Delap calibre throw-in; he is a more rounded player than the Stoke man.

Aston Villa’s undoubted strength comes from the pace and crossing ability that their wide men possess. In Albrighton, Villa possesses arguably the best crosser of a football in English football at the moment. His end product is at times absolutely perfect, which makes you wonder why Heskey or Carew have not scored more goals.

Ashley Young and Stewart Downing add further quality to this trio of wing wonders, both being direct, sharp and dangerous in the right areas. Young is both direct and pacey, while Downing has an excellent left foot and is a danger from outside the box. Agbonlahor should start up front for Villa and the problem he presents is obvious: electric pace and extremely robust. 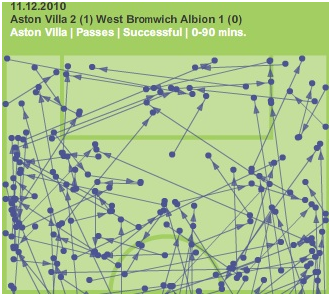 Petrov and Reo-Coker will play a no thrills part in the centre of midfield. They will look to disrupt and niggle and sweep the ball out to the wide areas where possible. Petrov is still finding his feet after a spell out of the side, but he is combative and if given time can pass the ball with good effect. I expect Reo-Coker to provide the legs and bite, but he also gets from box-to-box and pops up in the area as you will remember from last season.

When Aston Villa play well they exploit the width of the pitch with superb efficiency. A team who are very much the antithesis of Arsenal, they will play the ball square, direct and look to hit both flanks as soon as possible.

In Ashley Young, Stewart Downing and Marc Albrighton Aston Villa have possibly the best trio of crossers in the Premier League. It is therefore no coincidence that Houllier will try to get the ball wide whenever possible to look to attack the byline and swing crosses into the box. Young’s pace will pose a problem to whoever he plays against, and the frequency he touches the ball will mean that he will eventually get quality into the penalty area.

Likewise, Albrighton looks a potential England winger in the making and his crossing ability is simply superb. John Terry and Jeffrey Bruma will have their hands tied aerially if Villa takes control of those channels.

What the chalkboard illustrates perfectly is the complete lack of centrally attempted passes in Aston Villa’s recent game against West Brom. Look at the frequency of balls arrowed wide and direct passes/crosses into the box. There is a clear pattern of play at hand here and something that we are generally good at counteracting. In Ashley Cole we possess one of the best one-on-one defenders in the game anywhere in the world, and you would think that Bosingwa’s pace would nullify some of the impact that Young in particular will have.

Their recent game against Manchester City highlighted the inherent fault with this philosophy. If you can stop them playing the ball wide and stop the ball coming into the box, you will stop them from scoring. Of course, City are one of the more defensively minded teams in the Premier League who look to play on the counterattack, yet their strength comes from their ability to manoeuvre opposition teams into the channels they want them to operate within. 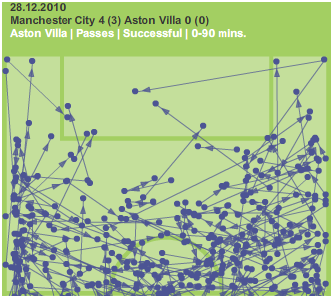 The graphic illustrates this perfectly. The intense cluster of passes made is in an area that City can easily contain Villa, with only a handful of passes making any sort of impact around the area. In fact, Villa only managed to hit corners or long balls into the box with any success. We will need to similarly limit Villa’s ability to work the ball wide if we are to stop them successfully.

1. MOMENTUM – After our recent woes the key word being thrown around the training ground this week will be “momentum”. We have a series of eminently winnable games coming up and they arrive at a time where the team are struggling for rhythm. Lampard showed glimpses of the control and experience we have missed in the past weeks, while Essien showed exactly what he capable is of with his rampaging run and pass to Drogba.

I will stress that there is nothing more important than picking up three points against Aston Villa. However, we must show some evidence of controlling possession and creating chances. Our next run of games is as follows: Wolves, Blackburn, Bolton, Sunderland, Liverpool, Fulham and Birmingham. We must take momentum from Bolton, through to Villa and beyond to go on a run of wins. Villa inclusive, we have a real chance to win 24 points on the bounce if we start to perform anywhere near our collective ability.

2. RAMIRES – Okay, we get it. Many of you do not rate the lad, fine. Yes, he cost a lot of money, is a Brazilian international and at 23 is not exactly a kid. Is it his fault he has been placed in a new League, in a side underperforming and short of confidence? New players should be afforded a settling in period, but Ramires has been thrown in at the deep end and asked to deputise in the absence of Essien and Lampard. Hardly the easiest of jobs for any recognised squad member, let alone a new addition.

All that aside, he actually has played fairly well of late. Ramires is getting used to the tempo of the League and needs people to vocally back him. After a good piece of play against Bolton, which was warmly received by the crowd, Ramires visibly grew on the pitch and ended up the best player on the park. Ramires is quick on the ball and should look to drive forward where possible to cause the opposition problems. His engine is superb, very much like Michael Essien, and he will be instrumental in covering the wider areas of the park to combat the pace of Messrs Young and Agbonlahor.

You get the feeling if the crowd back him or he manages to pop up with a goal, he might develop a little quicker than many anticipated. I talk about confidence and how it breeds performances. Look at the tangible difference pre-goal and post-goal in Chelsea’s performance against Bolton. Top players looking nervous, afraid in a way that was akin to watching England play; then we score. Ramires was no different to our experienced players. All he needs is a few things to go his way and to get physically acclimatised to the demands of the League and I think we have a bit of a player on our hands.

3. PLAYING ON THE FRONT FOOT – Too often of late we have let the opposition have far too much possession in dangerous areas. At Arsenal and with Bolton at home, we let the opposition play to their strengths as they dictated the tempo. Arsenal managed to play the ball through the middle thrice and scored thrice; Bolton managed to fire a plethora of crosses into the box and really were quite unlucky to not score from one of their chances.

We must take the impetus from the beginning and actually play our own game instead of this reactionary/static way we have been playing in recent weeks. Too often we are sitting back and waiting for counter that is not forthcoming. We need to get back to dominating possession and subsequently the middle of the park. Lampard will help with this effective possession, but Essien also needs to use his broad shoulders to start taking more responsibility.

If Drogba continues to improve, Malouda’s scoring boots remain on and Anelka/Sturridge/Kalou contributes, there is a real chance we can start to create the amount of chances that ensure we start to convert them.

Firstly, we must limit the amount of times Villa get in and around our byline and secondly, we need to expose the lack of pace in the Villa centre-back pairing as often as possible (by counterattacking/using our own width), we should come out of the game with all three points. If we take the game to Villa we will win. I have no doubt that our form is slowly returning, but we will need to supplement the squad in January if we are to really push on and compete for the title.

If our first eleven manage to play the majority of the season without injury or suspension, we have a real shot. Momentum is utterly vital though. 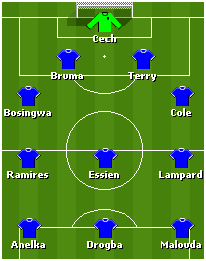 Given Villa’s salient strength combines pace and width, I would plump for Bosingwa to start ahead of Paulo in the right back berth. Bruma is likely to start the game at centre back and you cannot overstate the test of his credentials that Gabriel Agbonlahor will provide. Bruma needs to adopt the Gallas/Carvalho role, acting as the sweeper for Terry to attack the ball/the man when it is played direct to the Villa front line.

At this stage in his career he needs to concentrate of being a defender first and then a ball player. Cech and Bosingwa must communicate with him at all times to ensure that he does not go wandering. I am eagerly looking forward to seeing him in action in a competitive game and glad that Carlo has actually trusted him to start.

Ramires simply needs to pick up from where he left the game at Bolton, looking good and providing the sort of performance that you would expect for his price tag and reputation. Essien’s inner bison needs to be released once more, winning the personal battles with Reo-Coker and Petrov as/when they emerge.

One crunching tackle or piece of play will lift the crowd/the side and I am looking to him as the catalyst for the tempo. Frank needs to keep looking to improve his match sharpness, pick up the ball and pop it around the park. Anything from Frank will be a bonus at the moment, all things considered.

The front three needs to perform to some modicum of their combined talents. I personally would pick someone other than Anelka to start, he has been lackadaisical of late and with Sturridge on the bench I would prefer the directness he provides.

This is a game we should really be looking to win if we are serious about getting our title defence back on track. If the tempo is there, this should be quite straightforward: I am going for a 2-0 win.