Another season of loan news gets underway here at TheChels.net, and with over a dozen faces already having departed, there will be no shortage of news each and every week.

Some of Chelsea’s youngsters have returned to familiar climbs after impressive spells in 2011-12, whilst others have new homes or are embarking upon a much-needed move after a frustrating campaign last time out.

That brings us nicely onto our first subject of the season in Romelu Lukaku. The Belgian had some choice words regarding his (mis)treatment at Stamford Bridge last season but has thus far backed up his own opinion of himself by netting first for Belgium in midweek and then on debut for West Brom on the opening day of the Premier League season.

He didn’t start in the win over Liverpool, but made an impact in coming off the bench midway through the second half. He displayed tenacity, drive and a hunger to impress, and capped the day off with the third and final goal, a close-range header from Liam Ridgewell’s cross

Compatriot (hey, who isn’t Belgian these days?) Thibaut Courtois began his second season at Atlético Madrid with a 1-1 draw at Levante. He didn’t start particularly well, with a flap at a cross before being beaten by former Liverpool striker Nabil El Zhar, but had little to do in the remainder of the late night kick-off (11pm local time).

It was also confirmed this week that he will take his place in the opposing goal when Atlético face Chelsea in the European Super Cup at the end of the month. Goalkeeping Coach Christophe Lollichon had a big say in the decision as he feels it will help him appraise the young stopper’s progress.

Belgians will indeed feature regularly in The Loan Report this season, and joining Lukaku and Courtois in playing elsewhere is Kevin De Bruyne.

He made his competitive debut for Werder Bremen against Preussen Munster in the first round of the German Cup on Sunday and did well despite losing 4-2 in extra time. Playing in an advanced playmaking role just behind lone striker Nils Petersen, he showed some nice touches but it’s clear that this team is still familiarising itself with a host of new faces. 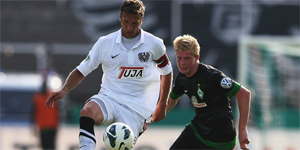 In the same competition, Jeffrey Bruma’s second season in Hamburg began against Karlsruhe but Thorsten Fink’s side continued to struggle and fell at the first hurdle, also losing 4-2. The Dutchman played alongside Michael Mancienne at centre-back in a combination which is likely to be first choice for the time being.

Over in the Netherlands, Vitesse’s season began some weeks ago in the form of Europa League qualifiers, but neither Tomas Kalas nor Patrick van Aanholt will be taking part in the competition proper as they fell to Anzhi Makhachkala after getting past Lokomotiv Plovdiv.

Both Blues boys made an impact though, with Van Aanholt finding the scoresheet in the second leg against the Bulgarians and Kalas unfortunately receiving his marching orders for a professional foul.

He was suspended for the following trip to Russia and his absence was felt as Anzhi put themselves into a strong position ahead of the return leg, which they won anyway.

The Arnhem club began their domestic campaign last weekend with a 2-2 draw against ADO Den Haag, for whom Kenneth Omeruo once again started.

The Nigerian impressed in the second half of last season after being moved there from Standard Liege following his transfer to Chelsea, and he figures to be an important part of their team this season.

He played 90 minutes against RKC on Sunday in a 2-2 draw, whilst Kalas and Vitesse recorded their first clean sheet of the campaign in a 1-0 win at newly-promoted Zwolle. Van Aanholt was left unused on the substitutes’ bench.

Back in England, Ben Gordon is still slightly shy of match fitness after a groin injury and hasn’t been involved for Birmingham City, and fellow defender Sam Hutchinson spent his first matchday as a Nottingham Forest player watching from the sidelines as his new team-mates beat Bristol City 1-0 at the City Ground.

Having been given the number two shirt, he projects to be a regular contributor, but having only hooked up with his new team the day before, this particular match came a little too soon for a debut.

Portsmouth had little option but to give a first appearance to Conor Clifford in League One however, with the Irishman amongst fourteen debutants for the cash-strapped south-coast outfit against Bournemouth.

Clifford’s deal is initially only for a month in order to facilitate his quick registration, and he expects to spend the entire season at Fratton Park. He had a solid half an hour in his first outing but will become a more effective contributor when he gets reacquainted with the pace of senior professional football.

Rohan Ince remains unavailable for selection at Yeovil Town though after suffering a shin injury in pre-season. He’s expected to complete his rehabilitation at Chelsea this week before returning to the south west to resume playing for the Glovers.

Sam Walker joined Bristol Rovers on Tuesday morning and went straight into the team for their Capital One Cup tie away to Ipswich Town the same night. 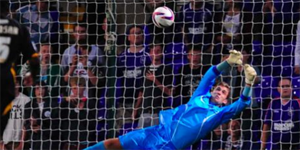 The big goalkeeper saved a second-half penalty against the team he supports but ended up on the losing side as Rovers lost 3-1, and was defeated again on the opening day of the League Two campaign as Oxford won 2-0 at the Memorial Stadium. Gashead fans seem positive about his early performances.

In Portugal, Milan Lalkovic and Matej Delac will spend the duration of the 12-13 season at Vitória SC and began with a high-profile fixture against Sporting Lisbon. Perhaps understandably, they were both on the bench for such a tough opening fixture, but Lalkovic got a few minutes at the very end of the match. Opportunities should arrive for both, and it’s a big year for each, with Lalkovic out of contract next summer and Delac being in no position to have a third season kicking his heels as a backup.

Finally, we head to the Spanish Second Division, where Mexican playmaker Ulises Dávila has been impressing for Catalunyan side Sabadell. A couple of nice goals in pre-season have already endeared him to the supporters and he will be a regular feature for the Harlequins this season.

They drew 0-0 against Girona yesterday in the first round of league fixtures; Dávila playing 89 minutes in his usual lively style, and almost grabbing a goal from an effort which was cleared off the line.