Archange Nkumu this week joined Yeovil Town on a month-long loan to become Chelsea’s eighteen player out on a temporary deal in 2012-13.

The weekly Loan Report is therefore liable to a long and detailed one, and whilst Nkumu didn’t manage to debut away to Scunthorpe United this weekend, he and fellow Blues defender Rohan Ince should have a decent role to play for the Glovers, who sit top of League One’s early standings despite their paper-thin squad.

We usually begin the round-up with the week’s stand-out performer(s), especially if someone has found the back of the net. This week, that means Conor Clifford takes centre stage.

He, like Nkumu and Ince, is playing in League One, but whilst Yeovil have hit the ground running, Clifford’s Portsmouth are just happy to be running at all.

The Irishman is one of an entire squad of new signings and although he is yet to start for Pompey, he has come off the bench to positive effect so far and grabbed his second career professional goal on Saturday in stoppage time away to Carlisle.

In an action-packed closing few moments, both teams scored twice as Carlisle ran out 4-2 winners. Clifford’s goal made it 3-2 and gave his team some hope as he steered into an open goal from the edge of the box after good work on the left wing from Jack Compton.

Elsewhere, and there have been a number of positive things to talk about, particularly from two players who are bidding to make Roberto Di Matteo stand up and take notice in Romelu Lukaku and Josh McEachran.

Lukaku followed up a debut goal for West Bromwich Albion against Liverpool with another swashbuckling substitute appearance away to Tottenham, managed by the target of much of his recent ire, Andre Villas-Boas.

The big Belgian has played as if he has something to prove this summer and did so again at White Hart Lane, rampaging through Spurs and causing Jan Vertonghen and William Gallas no end of grief. He went close to a goal on two or three occasions and was denied one which appeared to cross the line moments before James Morrison’s deserved stoppage-time leveller.

Down in The Championship, McEachran officially hooked up with Middlesbrough for the season on Monday and has wasted no time in asserting himself amongst the division’s very best players.

A man-of-the-match debut on Tuesday against Burnley had the local fans purring and whilst his second outing against Crystal Palace on Saturday was marred by conceding a soft penalty for a barge on the much bigger Jermaine Easter, he continued his impressive start and will be an important figure in Boro’s promotion bid this term. 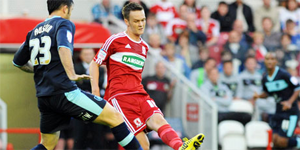 Here’s a selection of comments from those so very enamoured with the England Under-21 international already:

“Going to stick £5 on McEachran to get Young Player of the Year for the Championship too. He is just a class above the rest, with no offence to the rest of our young players who are absolutely great, McEachran is probably going to be the future of England alongside Wilshere and Cleverley.”

“McEachran was the one player keeping things moving, he was very good with his passing,his vision was excellent and he drifted about to excellent effect dragging the oppositon about. Shame nobody else exploited the space he cretaed.”

“McEachran 10/10 Showed more penatrative passing than our whole team in the last part of last season. Superb on the ball and given the position he has to play he was completely outstanding. Passing forward in midfield. That is all!”

“Midfield, as you say, go back too often, but with McEachran coming in, I think we’ll see a gradual improvement with this. he’s only had one day of training, doesnt know most of the players around him and needs to get familiar with their games. When he does this, he’ll pick them out for fun all day long.”

Josh is one of three players on loan in England’s second tier, and whilst Sam Hutchinson only came off the bench for Nottingham Forest, Ben Gordon was fit enough to make his first appearance for Birmingham after overcoming a groin strain.

Gordon started at left-back away to Watford but his team turned in a terrible performance and were deservedly beaten 2-0 by Gianfranco Zola’s upwardly ambitious Hornets. The left-back looked solid and rarely at fault, but was unable to make an impact in the attacking game as he so usually does.

Hutchinson, meanwhile, got a handful of minutes away to Huddersfield on Tuesday night in his Reds debut (and was booked for preventing Jordan Rhodes from taking a quick throw-in) and was handed ten more away to Bolton on Friday night, albeit in an unfamiliar right-wing role.

He went close to scoring with a header which was saved by Adam Bogdan, but will doubtless come into contention for a starting spot, most likely at right-back, where incumbent Brendan Moloney is perhaps the weakest of their back four.

Moving overseas, Thibaut Courtois is usually our chief focus but Atlético Madrid aren’t in action until Monday night this week, so his section will be duly updated once Los Colchoneros have played Athletic Bilbao. He’ll then be flying to Monaco for a date with Chelsea on Friday night in the European Super Cup.

Following a debut in the German Cup last weekend, Kevin De Bruyne made his Bundesliga bow on Friday night with the toughest assignment of the season. Werder Bremen lost 2-1 away to Borussia Dortmund with Kevin nominally in a central forward role, swapping with Aaron Hunt on occasion in what was a versatile-looking team.

Our man looked lively and certainly not overawed by coming up against the defending double champions and indeed, his range and quality of passing saw him stand out at times. He looks like being one of the first names on Werder’s team sheet.

Twenty-four hours later in Hamburg, Jeffrey Bruma got his league campaign underway as a starter at centre-back against Nurnburg, but HSV continued where they left out last season and went down to a disappointing 0-1 defeat.

There was better news from the Netherlands though, where Patrick van Aanholt, Tomas Kalas and Kenneth Omeruo were all on the winning side.

Vitesse duo Van Aanholt and Kalas both got 90 minutes in a 2-0 win away to Willem II; Kalas at centre-back and Van Aanholt at left-back. The latter has a wonderful opportunity to nail down a regular place in the team now that Alexander Buttner has completed his move to Manchester United, and has started by staking his claim with a good performance.

Omeruo and ADO Den Haag won 4-2 away to VVV Venlo on Saturday night, the Nigerian playing exactly as he has since moving to the Netherlands; energetic, tenacious and aggressive at right-back. 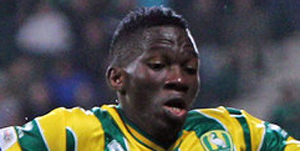 Amin Affane is set to become the fourth club representative in the Eredivisie this week as he finalises a proposed loan to Roda JC.

In Spain’s Segunda Division, Ulises Dávila and Sabadell drew their second consecutive fixture 0-0, but whereas last week’s stalemate against Girona may have been considered points dropped, this week’s result against recently-relegated Villarreal was definitely a point gained for the relegation favourites.

The Mexican playmaker is his team’s key player and he was a constant menace, going close to scoring on a few occasions and pulling all the strings for the hosts.

Finally, we head to Portugal where Milan Lalkovic, Matej Delac and Vitória SC were taught a harsh lesson at the hands of FC Porto on Saturday night.

Delac was the backup goalkeeper in the 4-0 defeat, which is concerning in itself as he has once again failed to earn the starting job at a club, but Lalkovic saw close to half an hour of second half action on undoubtedly the biggest stage he’s graced thus far, and he didn’t embarrass himself. He’s the more likely of the pair to earn a more regular assignment in the Vitória starting team.