For the fourth season in a row, Chelsea’s youth team are in the Semi Finals of the FA Youth Cup. They’ve lifted the trophy twice in that run, with a last four defeat to Manchester United sandwiched in between, and now face another trip to the North West of England to face Liverpool as they seek to become the first team to retain the title since the Reds did so between 2005 and 2007.

It will undoubtedly be the biggest test both teams have faced throughout the competition to date and, with respect to fellow Semi Finalists Nottingham Forest and Norwich City, probably a tougher task than a potential final. With game-changing talent throughout on both sides, there should be no shortage of action and drama across both legs.

The first meeting takes place tonight at Anfield, with the return leg at Stamford Bridge next Friday. Chelsea will hope that home advantage proves beneficial in the decisive fixture, for they remain unbeaten there in FA Youth Cup action in nearly a decade. Their last home defeat in the competition (at any venue) came in December 2003 when two Luke Moore goals saw Aston Villa come away from London with a 2-0 win.

The Blues are quite a cup club, with the first team on a record unbeaten streak in the FA Cup proper, and the youngsters performing similarly impressive feats in the junior competition. They’ve lost just four times in their last 29 youth cup outings, with one of those being a dead rubber last season away to Blackburn after winning the first leg 4-0.

One of those defeats did come at the hands of Liverpool and at Anfield, way back in February of 2009, when David Amoo’s solitary goal eliminated Dermot Drummy’s side. Andre Wisdom, Thomas Ince, Alex Kacaniklic, Jeffrey Bruma, Fabio Borini and Gael Kakuta are amongst the most notable graduates from that clash, and many more will be hoping to follow in their footsteps this time around.

Having suffered disappointment in the Final of the NextGen Series a fortnight ago, Chelsea will be hoping to redeem themselves and finish the season with academy silverware for the fourth term in a row. They have so far seen off Colchester United, Charlton Athletic, Barnsley and Derby County, but manager Adi Viveash will be deprived of a handful of lads who have contributed along the way.

The most notable absentee is Nathan Aké, who played 90 minutes for Rafael Benitez’ first team in Russia in Europa League action. His absence will be felt, and either centre-back Dion Conroy or full-back Fankaty Dabo figure to replace the Dutchman in the back four.

Jordan Houghton and Reece Mitchell are long-term injury victims whilst Adam Nditi is a doubt after suffering an ankle problem in the NextGen Series. New signing Kasey Palmer is cup-tied, having played for Charlton earlier in the competition.

Liverpool have some problems of their own, with creative US midfielder Marc Pelosi out of action, whilst plans for Raheem Sterling to drop down from first team duty to take part have been scuppered due to a thigh problem.

Their strength in depth is impressive though, with a handful of technically adept and positionally versatile midfielders like Jordan Lussey, Jack Dunn, Daniel Trickett-Smith and Jordan Rossiter. The man to watch, however, is winger Jordon Ibe.

A right-footed winger who loves to play on the left and drive inside, the former Wycombe youngster has elements of Sterling’s game to him, but he is taller, stronger and more robust, whilst playing with more maturity. He has a football league goal to his name as a 15 year-old and has scored three times during the Reds’ run to this stage; one which has seen them beat Swindon Town, Histon, Leeds United and Hull City. 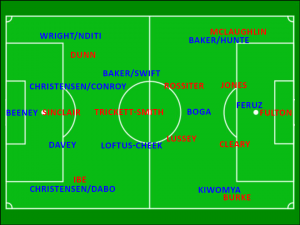 The two teams have met twice at Under-18 level and twice at Under-21 level in league action this season, with Chelsea taking the spoils at the younger level and Liverpool enjoying the better of the older affairs. Alex Kiwomya netted in home and away 2-1 Under-18 wins, whilst Liverpool’s Under-21s won 4-1 at Griffin Park before sharing a 3-3 draw in the return fixture when schoolboy Jeremie Boga grabbed two fine solo strikes.

There is an array of television coverage lined up for both legs as Chelsea TV and LFCTV will broadcast club-biased action, whilst ITV4 will attempt to bridge the difference for the neutral observer on free-to-air availability. If you want to be there in person, adult tickets are £5 for each game, purchasable on the night at Anfield, but MUST be bought in advance for the second tie at Stamford Bridge.