For the third time in five years Chelsea enter the FA Youth Cup looking to defend their title. In the intermittent years between successes they’ve reached the Semi Final and Final respectively before falling to Manchester United and Norwich in a bid to achieve the first back-to-back successes in the competition since Liverpool achieved the feat in 2006 and 2007.

This year’s Blues squad is arguably as well-set to finally succeed in doing so as any in recent memory. A significant number of players remain eligible for selection from the victorious 2013-14 squad and with a quite staggering array of quality in attacking positions it would be foolish to look past them as favourites even at this very early stage.

Adi Viveash’s three years in charge of the Under-18 group yielded two of those three Youth Cup trophies and the 45 year-old never failed to reach the Final. His promotion to Under-21 Manager in the summer leaves 28 year-old Joe Edwards in charge for the first time, having served as Viveash’s assistant in each of those previous campaigns.

Edwards is a former Chelsea academy schoolboy who began his coaching career at the age of nineteen and has worked at every age group up to the current Under-18s, working with many of this particular group regularly along the way. He has an enviable squad of talent and depth and there is no shortage of options for him to consider in a wildly versatile set of young professionals.

In goal, Brad Collins will step up and replace Mitchell Beeney full-time after serving as his deputy for most of last season. Collins was pressed into action during the first leg of the Final away to Fulham with Beeney required for first-team squad duty and did well. He’s an increasingly confident and mature stopper with solid fundamentals and can be relied upon to provide the foundations of a good defence.

Backup Jared Thompson has seen more playing time than he might have expected this season as the Under-16 youngster covered Collins’ recent absence with a broken hand and he did extremely well in his stead, keeping four clean sheets in eight appearances. He can be relied upon if his services are required.

The defence has lost some of the experience from a year ago with Fankaty Dabo, Andreas Christensen and Isak Ssewankambo graduating/moving on, but there remains a host of capable players with plenty of playing time in this competition already under their belts. Ola Aina made his debut in the Semi Finals of the ’12-13 campaign and in his own final year of eligibility will be relied upon to lead the group and provide versatility.

Having often featured at either full-back spot, he projects to partner Jake Clarke-Salter at the heart of the back four this time around. Clarke-Salter himself was introduced to the team in last year’s Semi Final and provides a fine balance with his left-footed approach and his range of passing combined with his natural athleticism and defensive prowess.

Jay Dasilva grabbed plenty of spotlight as another schoolboy last season and will predominantly play from left-back rather than in a more advanced role this time around, leaving Fikayo Tomori to fill the right-back spot for now at least. The first-year scholar has been the player of choice for both Edwards and Viveash across domestic and UEFA Youth League fixtures to date and, like Aina, is comfortable filling any defensive role.

George Brady will provide experience and aerial prowess from the bench at centre-half, as will Swedish prospect Ali Suljic. A trio of schoolboys will provide food for thought for Edwards, most notably the increasingly impressive England Under-16 captain Trevoh Chalobah but also Josh Grant and Cole Dasilva (the younger brother of Jay).

The standard of player available to Chelsea in the six more attacking positions is almost unfair to the rest of the competition. Ruben Loftus-Cheek got his hands on silverware as captain in his final year back in May but even without the imperious services of the towering midfielder, players who would otherwise be another team’s star man may struggle to find regular FA Youth Cup minutes.

It’s a fantastic problem to have for Edwards and it typically manifests itself in a positive way. Competition for places brings out the best in the boys and such is the quality of the next man up that nobody wants to lose their place. An increased determination prevails as each showpiece occasion approaches and then, even if they’re only afforded cameo appearances as substitutes, they want to make their time on the pitch count.

Charlie Colkett is perhaps the only player you can be certain of starting and that in itself is primarily down to the fact he’s likely to captain the team. He donned the armband when stepping back down to youth team level last week in a fixture against Arsenal in which Edwards tried out a few things with the Youth Cup in mind, and is ideal for the role.

His technique, decision-making and unassuming confidence mesh well with any number of midfield partners, the most likely being either Kasey Palmer or Charly Musonda. Both are more attack-minded individuals with no shortage of dribbling proficiency or flair and have the propensity to change a match in a flash. A more defensive-minded inclusion would come from one of three first-year scholars; Ruben Sammut, Mukhtar Ali and Isaac Christie-Davies have all played well this season and can provide a bit more security if it’s required.

Jeremie Boga, not yet 18, figures to start in one of the attacking midfield roles and should be the best player on the pitch each and every time. At many other clubs he’d already be making first-team appearances but when competing with the likes of Eden Hazard, Oscar, Willian and Andre Schurrle, it’s not quite so easy. He was injured for last year’s Semi Final and Final and will therefore be champing at the bit to play a part in a winning team.

The Frenchman has however missed a number of recent matches through injury and may not immediately be available for the trip north this week, whilst there are also recent fitness doubts over Musonda. Palmer and Colkett can all slip into that more advanced number ten role without a problem but the nod instead may go to Kyle Scott. The 16 year-old has been consistently good since beginning his scholarship and has worked his way into the Under-19 European team on merit. If any of those four are used centrally, Boga can play from a wide position (as can Musonda and to a lesser extent Palmer), but those berths will also prove hard to come by.

Izzy Brown, Tammy Abraham, Dominic Solanke. An all-English trio as prolific as any group of their standard this season, combining for in excess of thirty goals in all competitions before Christmas. They’re each as versatile as the other, with the ability to lead the line, play wide off each flank or operate in the hole just off the front. How Edwards ultimately uses them will likely be governed by the specific scenarios posed by each opponent but from the off in Round Three at least, Solanke is likely to spearhead the attack with Brown on the left and Abraham the right.

It’s really like an elaborate puzzle; a host of options who fit into multiple places and morph the composition of the eleven at each turn. It’s why Chelsea have to be considered overwhelming favourites to be involved at the business end of things again and we’ve not even gotten to those who are waiting in the wings to play if needed. 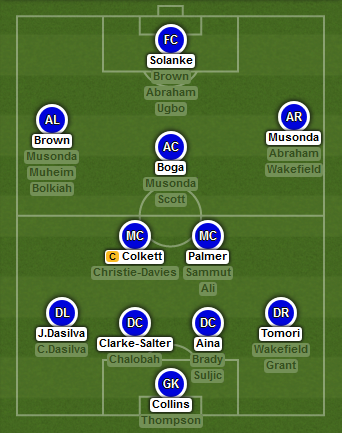 Charlie Wakefield, Miro Muheim, Iké Ugbo, Faiq Bolkiah, Josi Quintero, Hubert Adamczyk – the list goes on and on, and then there’s the Under-16s. Aina and Clarke-Salter were good enough to be entrusted with defensive roles at key stages of each of the last two final runs. Dasilva and Solanke were crucial to last season’s haul; who’s next? It could be the younger Chalobah or Dasilva, it could be Ugbo or Grant, Jacob Maddox or Mason Mount, or even Thompson in goal. There isn’t another club out there capable of delving quite as deep into their bag of tricks as Chelsea except perhaps Manchester City and so it’s as incumbent as ever for the Blues to play to the level they’ve proven themselves capable of and make sure they match up to their predecessors in maintaining such a sterling record in this cup.

The draw for Round Three paired them with old foes Leeds United and a trip to Elland Road. Leeds have produced two or three fine first team players in recent years in Sam Byram, Alex Mowatt and Lewis Cook and will certainly have the quality to make a good game of it in front of what is expected to be a good crowd in West Yorkshire on Tuesday night.

Kickoff is at 7.05pm and, as always in the FA Youth Cup, it’s live on Chelsea TV. Updates will be available throughout on Twitter @chelseayouth; you won’t want to miss it.