Barely had they stepped off the coach having returned from Switzerland with their winners’ medals around their neck did preparations for Friday’s FA Youth Cup Final get underway for Chelsea’s academy.

Monday’s UEFA Youth League triump against Paris Saint-Germain will live long in the memory as the Blues became the first club in the modern era to retain the premiere UEFA competition for their respective age group, but there’s no rest for the successful and over the next week they face a re-match with Manchester City for their latest assault on England’s most prestigious junior age competition.

It’s been a quite remarkable period of sustained dominance at home for Chelsea, who are in their fifth successive Youth Cup Final, something only previously done by the 1950s era Manchester United, later to be known as the Busby Babes. Five of those – Sir Bobby Charlton, Duncan Edwards, Wilf McGuinness, Tony Hawksworth and Eddie Colman – racked up a treble of successes and both Jay Dasilva and Jake Clarke-Salter can become part of that illustrious group by conjuring up their own ‘three-peat’ this season.

To do so they will once again have to overcome Man City as they did last April. The two clubs are dominant at almost every academy age group these days and, for those who might cynically suggest that their financial power gives them an unfair advantage, together they accounted for a quarter of all England U16-U21 call-ups last month. They currently sit first and second in the Under-18 league standings and, with Tottenham Hotspur also deserving of a cap doff, they’ve put clear daylight between themselves and their competitors in English youth football.

Last year’s showpiece saw Chelsea complete a famous double as a team featuring two 40-goal scorers in Dominic Solanke and Tammy Abraham proved too much for City’s bright lights to handle. Abraham returns for his final crack at another medal but Solanke, along with Charly Musonda and Izzy Brown, has graduated into senior football on loan overseas, whilst the likes of Brad Collins, Ola Aina and Charlie Colkett – all European champions again this week – have also departed.

The next generation haven’t skipped a beat by comparison. They’ve plundered 21 goals in six ties to get this far, one short of last year’s class, but have never trailed and are unbeaten to boot. Huddersfield were summarily dismissed 6-1 for a second year running before trips to Manchester United (5-1) and AFC Wimbledon (4-1) ended almost as convincingly. Reading put up a fight before going down 2-1 at Stamford Bridge and Blackburn, spirited as they were at Ewood Park in the first half of a Semi Final two-parter, were never truly on Chelsea’s level and were blown away in SW6, the defending champs prevailing 4-1 on aggregate.

They’ve done it with a home-grown vintage as well, as they did on Monday in Switzerland. Up until the 70th minute of the second leg against Blackburn, coach Joe Edwards had exclusively used players eligible to represent England and the fundamental core of this particular group have been Chelsea players since day one. A bundle of them joined local development centres as six year-olds before officially putting pen to paper at the age of eight, and their decade-long journey reaches another zenith with the biggest nights of their careers straight ahead.

One of those six year-olds was goalkeeper Nathan Baxter, for whom the 2015-16 season has been something of a relevation. As an Under-16 he watched as team-mate Jared Thompson pushed himself into the ascendancy, playing up an age group and earning international honours whilst marking himself out as first-choice when his scholarship began. Fate, however, would intervene, and an injury-hit couple of months for Thompson gave Baxter the chance to shine.

He grabbed it with his typically safe pair of hands and hasn’t looked back, enjoying the bulk of the league campaign and becoming an ever-present in the cup side. Ahead of him lies one of the best groups of defenders anywhere in Europe both individually and as a unit, and it’s led by the two centre-backs who have each caught the headlines of late.

Jake Clarke-Salter is the academy’s newest first-team debutant following his cameo at Villa Park and he figures to get at least one more look before the end of the season. He captains the team and will be looking to follow in the footsteps of Conor Clifford, Nathaniel Chalobah, Ruben Loftus-Cheek and Colkett in getting his hands on the silverware. Alongside him is the formidable Fikayo Tomori, scorer of the opening goal against PSG earlier in the week.

Whilst Clarke-Salter has grabbed the headlines and the personal recommendation of John Terry, Tomori has gone about his business slightly out of the spotlight. He’s no less impressive a defender though, combining exceptional physical prowess with a smart reading of the game and has come into his own this year.

Coach Edwards has spent the season alternating between a back three and a more traditional four, with both looks adopted at times against Blackburn last round. The versatility of the group available to him allows for that possibility and so Josh Grant may reprise his role at right-back, safe in the knowledge he can seamlessly become a third centre-back if called upon.

Trevoh Chalobah is equally capable of doing so and it might be a straight fight between him and Grant for a starting spot with the return to fitness of Jay Dasilva. Injured against Ajax, he watched Chalobah deputise for him but having only played a bit-part in their continental jaunt this week will be desperate to start. He operates anywhere on the left, from full-back to winger and everything in between and, if it is a back three, expect Dujon Sterling to do the same on the right.

The youngest player involved in the Final having only turned 16 in October, he remains on schoolboy terms for this campaign but has emerged as a driving force in 2016. He was a decisive substitute against Reading, he scored against Blackburn and he held his own against players three and four years his senior against PSG. Often deployed as a right-winger, there appears to be no end to his talents and he will be integral to Chelsea’s chances of winning.

Even more important though will be the central midfield combinations. Previous rounds have seen Ruben Sammut, Mukhtar Ali, Kyle Scott and Isaac Christie-Davies all involved as a reliable foursome capable of controlling the play and keeping Chelsea on top. It’s a beautifully-balanced group too; Sammut puts in the hard graft and gets stuck into plenty of dirty work, Ali – ever-present in both cup runs – links defence to attack with composure belying his years, Christie-Davies brings an under-rated attacking guile and Scott floats around the pitch with authority and technique to spare.

The dilemma for Edwards and his assistant Jody Morris is one every coach would love to have. First-year pros Jacob Maddox and Mason Mount are in exceptional form and have played their way into contention on merit. They each contribured to goals in the Semi Final second leg and went on to play big roles for Adi Viveash’s Under-19s too, but six into four doesn’t go. It wouldn’t be a surprise to see the older quartet contest the away leg in a safety-first approach before unleashing the younger lads at Stamford Bridge, as was the case last time out, but it’s a fine problem to have.

Tammy Abraham’s place in attack remains undisputed at least. His 26 goals pale somewhat against last season’s 41 but he’s a significantly better player twelve months on and has made great strides in his hold-up play as a lone forward against two centre-backs. Iké Ugbo offers a goal-poaching abundance in reserve.

City, like Chelsea, are without roughly half of last season’s squad but whilst Pablo Maffeo, Angelino, Kean Bryan, Brandon Barker, Bersant Celina and Kelechi Iheanacho have moved on, Jason Wilcox has been blessed with another wonderful crop perhaps more capable of beating Chelsea than last year’s side was. 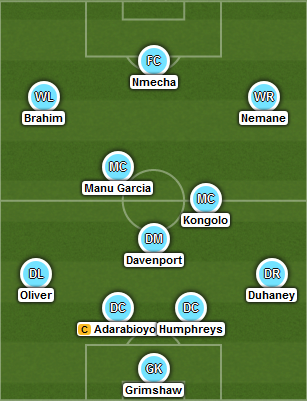 A robust and reliable spine begins with returning centre-backs Tosin Adarabioyo and Cameron Humpheys, who have both already played at Stamford Bridge this season following Manuel Pellegrini’s FA Cup selection policy. They return much better for the experience and hoping for a better result, and have the additional bonus of Daniel Grimshaw playing behind them in goal.

Kjetil Haug had that honour last season but made a series of mistakes with the ball at his feet that severely impacted City’s ability to play out from the back. Grimshaw is much more comfortable distributing possession and has better goalkeeping fundamentals to fall back on as well.

Full-backs Demeaco Duhaney and Charlie Oliver can play on either side but Duhaney’s daring is expected to be used on the right and Oliver’s no-nonsense steel will go up against Sterling on the left. They’re ably protected by the mobile Jacob Davenport, who holds the fort in midfield and, you get the impression, enjoys playing the destroyer.

He allows Rodney Kongolo and Manu Garcia to get on with what they do best, impacting play in the attacking half. Kongolo brings the size and power and Garcia knits it expertly with traditional Spanish invention and flair, hallmarks of a game that saw him debut and score for the first team back in the autumn. Chelsea did well to subdue him a year ago and must do so again to aid their chances of another win.

In attack, Wilcox has an enviable trio who can win a game in an instant. Lukas Nmecha spearheads things with as many goals as Abraham across all age levels this season and plays a similar game, whilst Aaron Nemane on the right is a perpetually under-rated talent who gave Dasilva a torrid time at the ‘Minihad’ when they last squared off. His short, squat nature reminds many of a young Shaun Wright-Phillips and he has enough in his locker to strike at any moment.

City’s star, though, is Brahim Diaz. Touted as something of a ‘next Messi’ in his formative years at Málaga, it’s taken him little time in showing why such comparisons existed and why Manchester’s blue side moved for him as a 14 year-old. In a word he can be mesmerising. His dribbling often seems other-worldly, he operates off either foot and at varying speeds, and opponents routinely look silly trying to get the ball from him. Chelsea found this out at close quarters in March’s 4-3 league defeat and must learn their lessons if they want to avoid another Brahim-infused defeat.

The Citizens won out in 2008 when Daniel Sturridge helped them over the line against a Chelsea side in their first final for 50 years. Chelsea evened the score last season with individual performances getting the job done, but the picture is slightly altered for the third (and almost certainly not final) part of the trilogy. It’s Man City who may end up relying on the one or two rather and it’s the Blues who will look towards the collective. It’s served them well all season, it won them a second UEFA Youth League crown, and it will hopefully pay dividends once again.

Both legs of the Final are being televised live on ITV4 as well as on free-to-air Chelsea TV. Friday’s match at the Academy Stadium in Manchester kicks off at 7.45pm, as does next Wednesday’s second leg at Stamford Bridge. Tickets remain on sale for the latter, priced at £5 for adults and £3 concessions, and ticket sales are going well, extending into the lower West Stand now. Updates will be available throughout on Twitter @chelseayouth and, as always, you don’t want to miss this one.