The Loan Report returns for a brand-new season and it does so with a bang with no fewer than five goals to bring you from the first notable weekend of Chelsea loanee action in 2016-17.

The opening weekend of the Football League season saw five Blues make their debuts for new clubs – one making his senior professional bow in the process – and, in the space of two dramatic minutes late on Saturday afternoon, things exploded into life.

Alex Kiwomya was the first to strike as he scored his first senior goal for Crewe Alexandra at Stevenage. Having come off the bench shortly after half time the pacy winger had already claimed an assist for Ryan Lowe’s opener with a sublime through ball before then taking centre stage with a scorching solo goal to get his stay at Gresty Road off to a perfect start.

Kasey Palmer was next up as he marked his first appearance in a Huddersfield Town shirt by scoring with his first touch. On as a substitute for no more than thirty seconds after Brentford had notched a late equaliser, the 19 year-old midfielder was on hand to clean up a loose ball and give the Terriers a 2-1 opening day win.

It was his first outing in the adult game and the perfect start to his career. This nutmeg later on didn’t go unnoticed either…

Before anyone had a chance to catch a breath, though, Tammy Abraham got involved. A frenetic 48 hours saw the big forward fly back from the United States with Chelsea’s first team before being driven down to Bristol on Friday, signing a season-long loan deal with Bristol City, and going straight into the squad for their first match at home to Wigan.

At 1-0 down with a quarter of an hour to go, manager Lee Johnson went for broke and introduced Abraham in an attacking move that paid immediate dividends. His header from a corner got them back on terms before he then had a small part in Bobby Reid’s stoppage-time winner.

The three goalscorers had found the mark in the 79th, 80th and 81st minutes, capturing the attention on day one. 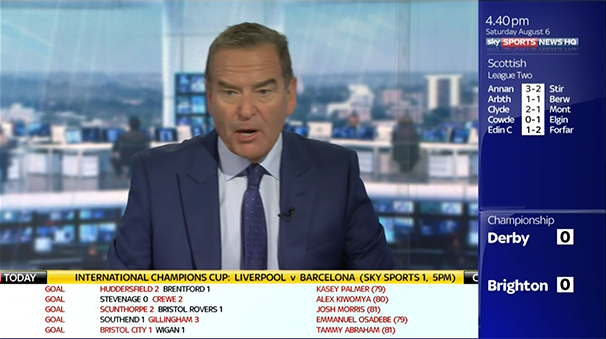 It wasn’t over yet either. Vitesse Arnhem got their Eredivisie season underway at Willem II in the evening and ran out 4-1 winners after a devastating first half in which all of their goals arrived in a twenty-minute period. Two of them belonged to Nathan, who was only starting due to injuries suffered by first-choice wingers Milot Rashica and Navarone Foor, but he made his opportunity count in style with an opportune brace.

The Brazilian was substituted shortly after the hour mark with a job very well done whilst Lewis Baker, currently the only other Blue at the Gelredome, kicked off his second year in Arnhem with a decent 90 minutes controlling the midfield.

Tomas Kalas is back in the Championship once again but has swapped the red of Middlesbrough (now promoted to the Premier League) for the white of Fulham just down the road in S6. He and they beat Newcastle 1-0 on Friday night in an impressive display; the Czech centre-back earning many a plaudit for his committed performance and his partnership at the back with fellow new signing Michael Madl.

Jordan Houghton started for Doncaster at Accrington Stanley after confirming his five-month switch earlier that morning and got 73 minutes before being substitutes as manager Darren Ferguson tried to chase the game at 2-1 down, eventually losing 3-2.

Mitchell Beeney, the third League Two loanee, was an unused substitute for Dermot Drummy’s Crawley Town in their 1-0 win over Wycombe Wanderers.

Another year, another loan for Matej Delač. Royal Excel Mouscron represent his tenth temporary venture since signing for the Blues in 2009 but, through two weeks of the new Jupiler League season, he has been unable to unseat incumbent first-choice Vagner between the sticks.

After three months out of the side due to niggling injuries, Wallace returned to the Gremio side on Thursday night to play 90 minutes in a goalless draw at home to Santa Cruz. The full-back’s return to Brazil hasn’t quite gone to plan but he will be hoping that the chance to return to playing (ironically as the result of someone else’s misfortune on the injury front) will lead to a fruitful rest of 2016.

Joao Rodriguez has scarcely featured since joining Independiente Santa Fe for the ’16-17 campaign, with just thirteen minutes of action under his belt so far, and he was an unused sub last Monday night away to Cortuluá.

– Nathan Aké and Bournemouth get their Premier League season underway next Sunday at home to Manchester United.
– Charly Musonda (Betis), Jeremie Boga and Victorien Angban (both Granada) have to wait an additional week after that before La Liga starts on the weekend of August 19th-22nd.
– Andreas Christensen (Gladbach) and Baba Rahman (Schalke) aren’t in Bundesliga action until a week after that but the Danish international does at least have Champions League qualification to tide him over in the long wait for the new German season to kick off.

Before the month is out we could also see as many as twenty more players join the #CFC #LoanArmy; check out our Season Preview for a deeper look at who might be going where and what to expect from the year ahead.