It’s been another stunning year for Chelsea’s academy. Unprecedented success on the pitch at youth-age level, an increasing presence in the first-team at Stamford Bridge, and a growing stature in the production of players and staff making an impact elsewhere in world football have made the last twelve months particularly memorable. Here are some of the highlights as we approach 2019.

2018 was only 28 days old when Callum Hudson-Odoi made his Chelsea debut. Having started the new calendar year in astonishing form for the Development Squad, Antonio Conte could no longer claim he needed to take another step before being given a chance on the bigger stage, and introduced him from the bench in the Blues’ FA Cup win over Newcastle.

A Premier League debut followed three days later in defeat to Bournemouth and, although further opportunities since then have been limited, he remains one of England’s very brightest prospects.

Hudson-Odoi took centre-stage again in February when he helped take Chelsea to within a penalty or two of a Wembley Final. Joe Edwards’ Under-23s were defeated by Lincoln City in the Semi Finals of the Checkatrade Trophy, but not until they’d given everything on a truly challenging night at Sincil Bank, a match in which Ethan Ampadu was the outstanding performer.

The Dev Squad didn’t get their hands on any silverware, but Jody Morris’ Under-18s certainly did, and they got the ball rolling in March by winning the inaugural Under-18 Premier League Cup. A pair of first-half goals from Charlie Brown proved to be enough against Tottenham Hotspur at a snow-covered Cobham. 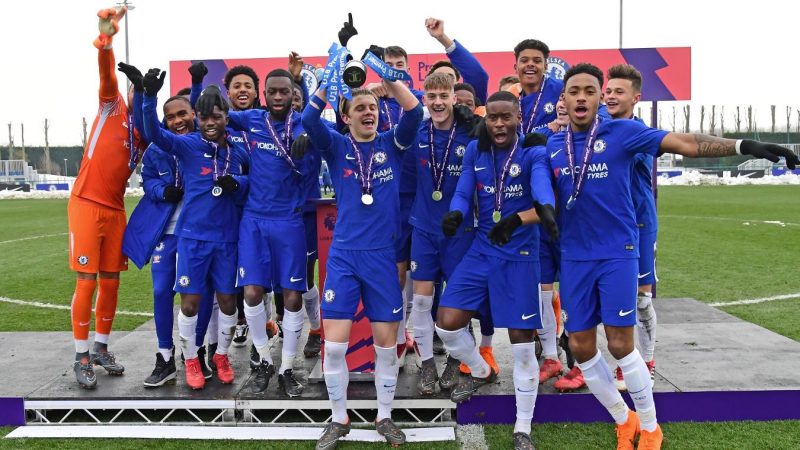 Attentions then turned to the FA Youth Cup. Arsenal stood between the Blues and a place in history; only Manchester United during the 1950s had won five editions in a row, but a rampant Chelsea blew their North London rivals away across two legs. A 3-1 triumph at Stamford Bridge was followed by a 4-0 battering at the Emirates, and memorable scenes followed long into the April night.

On the other side of the coin, Edwards’ Under-19s were denied UEFA Youth League success by Barcelona. Reaching the Final of Europe’s premiere club youth competition, and seeking to win it for the third time, they simply didn’t turn up when it counted and were well-beaten on the day.

With so much energy placed squarely on the big matches, something had to give, and so the youth team’s three-year unbeaten run at home was finally ended by Tottenham Hotspur. For 1111 days and 56 matches, Chelsea were unbeatable on their own patch but, with a weakened side against a much more experienced outfit, they finally bid farewell to a run that might not ever be repeated. They won 51 of those 56 matches and scored almost 200 goals while winning every possible trophy along the way.

It ended today, but it was an outstanding run that deserves celebrating. #CFCU18

A new run starts a week on Friday. pic.twitter.com/QNSH8ErIvs

At the end of May, Jody Morris departed Chelsea to join Frank Lampard at Derby County, earning the position of Assistant Manager to his long-time friend. When he left, he did so as the Under-18s’ most successful ever manager. Needing to beat Manchester United in the National Premier League Final to cap an historic quadruple AND guarantee the club’s return to the UEFA Youth League after Conte’s failure to qualify for the Champions League, his talented teens won 3-0 at Leigh Sports Village to provide the perfect finale to the script.

Morris therefore won all seven trophies available to him during his two years in charge, losing just five times in 63 outings, and averaging more than three goals per game.

As #CFCU18 manager, Jody Morris' teams won every competition they entered over his two seasons in charge. A treble in 16-17, a quadruple in 2017-18.

It’s often stressed that, for all the success on the pitch behind the scenes, the real proof of an academy’s work is the players they send into the professional game. Seeing Ruben Loftus-Cheek representing England at a World Cup in which they reached the Semi Finals will have been a monumental source of pride to every single person who worked with him from the age of eight, and his subsequent development under Maurizio Sarri just as much.

A quiet month in general as pre-season began again, Andy Myers was named the 22nd youth team manager in club history, replacing Morris and welcoming another fellow former left-back and Chelsea graduate in Jon Harley as his assistant.

Congratulations to Andy Myers, who has been named as Jody Morris' successor in charge of #CFCU18.

Nathaniel Chalobah was a Chelsea player for more than ten years before leaving for Watford in the summer of 2017. A year later, and after missing almost all of that time with a fractured knee, he was given his first England call-up by Gareth Southgate, eventually making his debut against Spain in October.

The season roared into life at club level with Chelsea youngsters catching the eye left, right and centre. Nobody was more impressive than the previous two Youth Cup winning captains now plying their trade in the Championship. Reece James won three consecutive Player of the Month awards at Wigan Athletic, while Mason Mount scored five times in his first eleven appearances for Derby and, under Lampard and Morris, helped knock Manchester United out of the League Cup at Old Trafford.

Unable to contain the hype any longer, Southgate rewarded Mount with a full England call-up that made him the first outfield player playing in the second tier to receive the honour in more than five years. He didn’t get to make his debut, and missed the November internationals through injury, but it won’t be long before he does.

Back at Chelsea, the Under-19s kicked off their latest assault on the UEFA Youth League with a 10-1 trouncing of Molde.

Full Time: Chelsea 10-1 Molde. It's advantage Chelsea ahead of the return leg in Norway three weeks from now; Redan and Gilmour lead the way with hat-tricks, Brown scored two, with McEachran and an own goal completing the scoring.

Continuing with the loan army, Tammy Abraham went goal crazy in November, scoring six times in 18 days including four in a 5-5 draw with Nottingham Forest.

All good things do have to come to an end and, eight days before Christmas, Manchester United ended Chelsea’s Youth Cup run with a 4-3 win on a dramatic night back at Leigh Sports Village. Without Hudson-Odoi and Ampadu, Myers’ boys weren’t at their best on or off the pitch, and were put to the sword by a terrific Mason Greenwood hat-trick.

Still handily placed in the league and in Europe, as well as a place in the last sixteen of the Checkatrade Trophy and in position to challenge for Premier League 2 honours, 2019 promises to be another spectacular year for the academy. Don’t miss it.