Chelsea return for their fifth UEFA Youth League campaign this week with a different outlook on the competition than they’ve ever had before.

Their debut in 2013-14 ended at the Quarter Final stage in defeat to Schalke before back-to-back successes under Adi Viveash in Nyon; the second of those was insufficient to allow them to defend their crown under the then-competition rules, with the first-team also failing to qualify them via conventional means.

They returned after a one-year hiatus last term seeking to reclaim a trophy they never lost, and once again headed to Switzerland for the Final, only to lose 3-0 to Barcelona in one of their poorest and most deflating performances in years. Manager Joe Edwards described it as ‘an absolute disaster from start to finish’ and, heading into the 2018-19 edition, there is a steely determination from coach and team alike to make amends.

The particular road back to the Stade Colovray this time around, on the banks of Lake Geneva, is one the Blues are yet to take. As the big boys again missed out on the Champions League, it fell on Jody Morris’ Under-18s to win the Premier League last season to qualify them for the Domestic Champions Path half of the Youth League.

Thirty-two teams, one from each of Europe’s top-ranking countries, will play home-and-away ties in October and November to whittle to pack down to eight. Those eight will then play off against the eight runners-up in the Champions League path – the group stage that mirrors the continent’s flagship tournament – in a one-off match before Christmas to determine the teams that join the group winners in the last sixteen in early 2019. 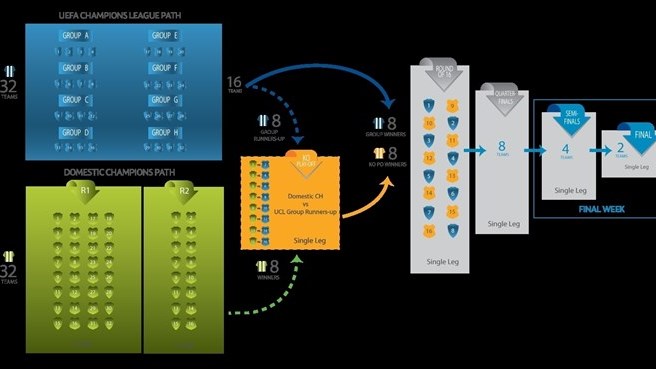 It provides a completely new experience for Chelsea. Six group fixtures allow the opportunity for a poor performance to be balanced out by better results in the other fixtures, and comes with much more room for error. Instead, the Under-19s host Molde this Wednesday before heading to Norway three weeks later knowing that a repeat of the Barcelona disappointment could have considerable ramifications.

The path to the playoffs has been somewhat kind; should Molde be overcome, either KR of Iceland or Sweden’s Elfsborg lie in wait in November and, while Chelsea will respect each and every opponent, it would be a catastrophe should they not seal a playoff place. Then it’s wide open; with only one round of fixtures played in the groups, it’s impossible to predict who could stand between the two-time champions and a place in the knockout stages but, as usual, it’s the Londoners who are touted as a potential winner of the Lennart Johansson Trophy.

Their 40-man squad was registered with UEFA in mid-September and includes six of the eleven players that started last year’s final. Edwards can no longer call upon the likes of Reece James, Dujon Sterling, Josh Grant, Jacob Maddox or Harvey St Clair, and Marcin Bułka has been omitted entirely with Europa League duties to look forward to instead, but there is exceptional talent both at the very top and throughout the group. 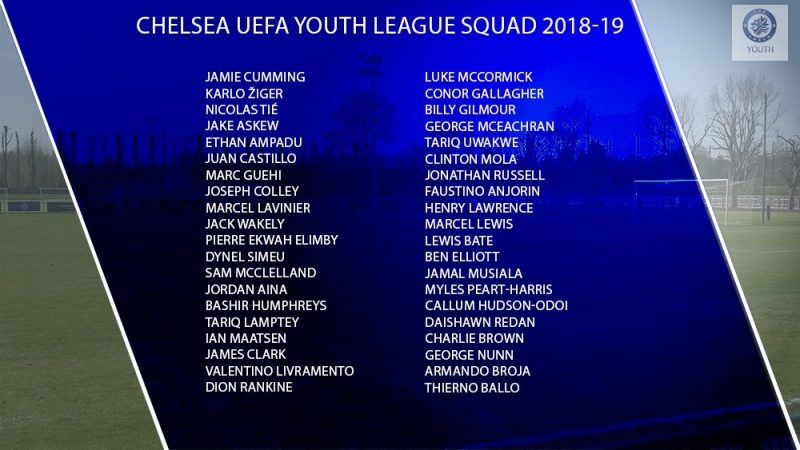 Favouring a 3-5-2 so far in 2018-19, Edwards has three senior central defenders to lean on, starting with a player he lost to injury in the Quarter Finals last time around. Ethan Ampadu is safely back from a broken ankle now, and promises to be a key figure in their pursuit of success, yet he will automatically become ineligible if he makes three Europa League appearances.

Joseph Colley and Marc Guehi will join him in the strongest defence on paper, but Marcel Lavinier will push them hard, as will fellow second-year Jack Wakely and new French signing Pierre Ekwah Elimby. Depth is provided by England youth internationals Dynel Simeu, Jordan Aina and Bashir Humphreys, while Northern Irish youngster Sam McClelland is one to watch if his early displays for Andy Myers’ youth team continue to be encouraging.

Chelsea’s wing-backs have been integral to their prolonged success over the last five years in particular; they must be comfortable in possession to transition from defence to attack, they must have the physical tools to dominate at both ends of the pitch, and they must be versatile enough to produce in different areas of the pitch as the game dictates. Fortunately, in Juan Castillo and Ian Maatsen on the left, and Tariq Lamptey on the right, they have outstanding footballers who are capable of stealing the show every time they step on the pitch.

Castillo’s development into a powerful and authoritative presence on the left is one his compatriot Maatsen, a 16 year-old summer recruit from PSV, would do well to try to imitate. His composed and mature control is superbly balanced by Lamptey’s electric displays on the right; a genuine force of nature, his diminutive stature works in his favour as his remarkable quickness, agility and speed of thought continue to embarrass much more experienced opponents. James Clark, Valentino Livramento and Dion Rankine offer cover when needed.

Perhaps strongest in midfield, Chelsea have riches to call upon in what has typically been the most important area of the team in European competition, and an area in which they were found particularly wanting in the final against Barcelona. Lacking in simple numbers as well as the execution of the gameplan, they were curiously and disappointingly off-colour when it counted most, and there cannot be a repeat of that if they’re to impress again this term. Luke McCormick has been registered as one of the three permitted over-age players and, along with Conor Gallagher, Billy Gilmour and George McEachran, he leads a group of game-changers. He was their leading scorer in last year’s edition with five goals and, as a prospective captain this time around, will be counted upon to lift the team when needed.

Tariq Uwakwe’s development will hopefully see him provide a dynamic attacking option, while Clinton Mola – another left-footer – can stabilise the midfield when needed. Faustino Anjorin has the best prospects of any of the new first-year scholars as far as breaking into the team on a regular basis is concerned; a starring role for the Under-18s as a schoolboy last term has fast-tracked him to the next step, and the squad needs his robust box-to-box play and clinical finishing in and around the penalty box.

Callum Hudson-Odoi is in the same boat as Ampadu; he has the talent to single-handedly take over the Youth League if he so pleases, but you would rather see him get a prolonged look in the Europa League and become ineligible for Under-19 football. If he does the latter, the 3-5-2 favoured by Edwards will lack his dynamic presence, but it will also allow for Daishawn Redan and Charlie Brown to really build on their partnership up front.

They dovetail neatly at their best; Redan’s inclination to run the channels with a bullish energy meshes well with Brown’s subtle movement and left-footed balance, but both of them need to be a little more clinical when presented with chances. Prolific at Under-18 level due to the sheer number of chances created by their team-mates, they’ve found the step up in competition somewhat less forgiving, and are working hard to respond accordingly.

George Nunn, Armando Broja and Thierno Ballo are waiting in the wings for a chance to make a name for themselves as an impact substitute; whichever of them happens to be in-form around each fixture is likely to get the chance of doing so.

It’ll look and feel different, particularly before we tick over in 2019, and especially if Ampadu and Hudson-Odoi move on to bigger and better things, but that’s the very nature of youth football. The opportunity is there for the next crop to shoulder the responsibility of upholding the Blues’ proud record in the Youth League, and they have the ability to do so. The competition itself has arguably never been stronger, but it simply means Chelsea will have to up their game if they’re to win it for a third time.

The journey begins tomorrow afternoon at home to Molde, with kickoff at Cobham set for 1pm UK time, before the return leg in Norway three weeks later. You can, as always, keep right up-tp-date throughout the season here at TheChels.net, and on Twitter @chelseayouth.