There is no argument about it; Chelsea have been the most successful club in England at academy level over the past decade. Seven FA Youth Cups, two UEFA Youth League titles, domestic league wins at Under-18 and Under-21 level and a remarkable domination of just about every junior age-group tournament you care to name. With thirty first-team graduates on top of the cake, it’s been an historic ten years and, as we approach the final days of 2019, there is no better time to reflect on a job very well done by everyone at Cobham.

2009-10
The bar was set nice and early as Dermot Drummy’s youth team won the club’s first FA Youth Cup in fifty years. Conor Clifford’s late thunderbolt in front of more than 10,000 fans at Stamford Bridge lit the fuse for the fireworks to come in the years ahead.

2010-11
They had the taste for success down at Cobham now, and a year later there were further scenes of celebration at the Bridge, this time from Steve Holland’s Reserve team as they became national champions for the first time ever. Todd Kane’s goal ensured the final against Blackburn Rovers went to penalties, whereupon Conor Clifford, Gokhan Tore, Milan Lalkovic, Adam Coombes and Michael Woods were spot-on in victory.

2011-12
The FA Youth Cup was back in the cabinet in 2012; a dramatic run that saw late comebacks and penalty shootout triumphs at every turn finished with a 4-0 first leg win against Blackburn again, where future first teamers Nathaniel Chalobah and Lewis Baker found the back of the net. The tie was well over before Rovers won the second leg.

The campaign was to finish in memorable fashion as academy graduate Ryan Bertrand started in the Champions League Final, where Chelsea beat Bayern Munich.

2012-13
This was the year of the one that got away. Adi Viveash’s Under-18s were beaten by Norwich City in the FA Youth Cup Final, while Dermot Drummy’s Under-21s lost the finale of the inaugural NextGen Series – the precursor to the UEFA Youth League – against a Jack Grealish-inspired Aston Villa.

2013-14
2014 brought a repeat of the start of the decade, with success across both academy teams. Drummy led the Under-21s to another national title as Charly Musonda and Lewis Baker scored in a 2-1 win against Manchester United at Old Trafford, while a last-minute Dominic Solanke winner saw Adi Viveash’s youth team beat Fulham 7-6 on aggregate to win the first of five consecutive FA Youth Cups.

2014-15
By the halfway point in the decade, Chelsea had positioned themselves as one of the foremost academies in England, but the rest of Europe was about to be served notice, as Solanke and Izzy Brown led the way in a 3-2 win over Shakhtar Donetsk that saw the Blues crowned UEFA Youth League winners for the first time. Another Youth Cup followed too; Man City were beaten home and away, with Tammy Abraham joining Solanke and Brown on the scoresheet, and that was a trend that was to continue for years to come.

2015-16
The double double! Chelsea retained both of those trophies in dramatic and memorable fashion over a nine-day period in April 2016. Fikayo Tomori and Kasey Palmer scored as PSG were edged out in the UEFA Youth League, while Tomori put the finishing touches on a second straight Youth Cup beating of Man City, where Abraham, Mason Mount and Dujon Sterling also made their presence felt.

2016-17
This was supposed to be the year City finally lifted their curse and got their hands on the coveted Youth Cup. They had Jadon Sancho, Phil Foden, Brahim Diaz, Aro Muric and Lukas Nmecha, but Chelsea had Jody Morris and a group of youngsters who were about to make academy history. They smashed City 5-1 at the Bridge for their fourth in a row but were able to add the Under-18 Premier League title to that a month later, completing a domestic treble that had started by clinching the Southern league title back in February.

2017-18
How do you follow up a treble? By winning a quadruple, that’s how. Morris’ men retained their haul from 2017-18 while adding the Premier League Cup for the first time, as Charlie Brown’s double saw off Tottenham at Cobham. A run of 21 wins in 23 matches from November to April underlined their credentials as the country’s best, culminating in a record-equalling fifth consecutive FA Youth Cup win. Arsenal were summarily dismissed 7-1 on aggregate as the Blues scored 33 goals and conceded just one in the competition.

Back in the UEFA Youth League after a UEFA-enforced absence, Joe Edwards’ boys reached the Final once again, but came up short against Barcelona at the very end.

2018-19
It was a transitional year for the academy, who said farewell to Morris as he joined Frank Lampard at Derby County, and also said farewell to their Youth Cup run after Mason Greenwood’s hat-trick halted their progress in Round Three of the 18-19 edition. Maurizio Sarri became the first manager to last a full season under Roman Abramovich not to give out a single academy debut, and Edwards’ Under-19s suffered the same pain as a year earlier as they went all the way back to the UEFA Youth League Final only for Porto to spoil the party.

2019-20
And so here were are at the end of a record-breaking decade. Lampard and Morris have come home, joined by Edwards on the first-team staff, and academy players are front and centre. Andy Myers’ Development Squad are unbeaten in the league, Ed Brand’s Under-18s are unbeaten in all competitions and top of the league in imperious form. The door has finally been opened and the future is both bright and blue. Here’s to the next ten years. 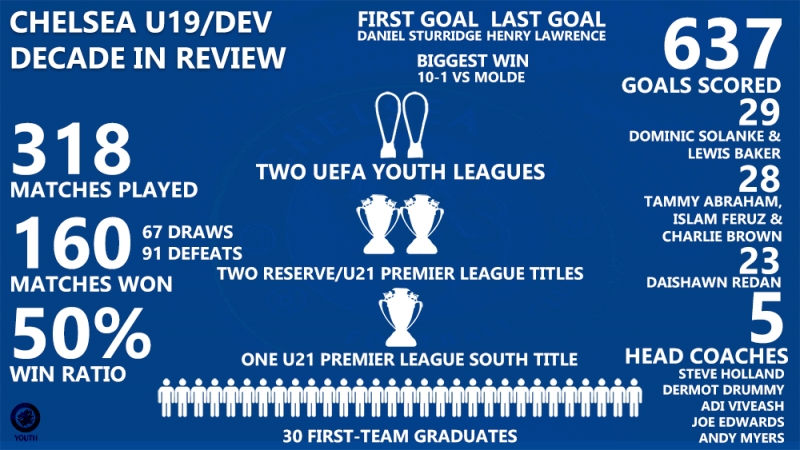 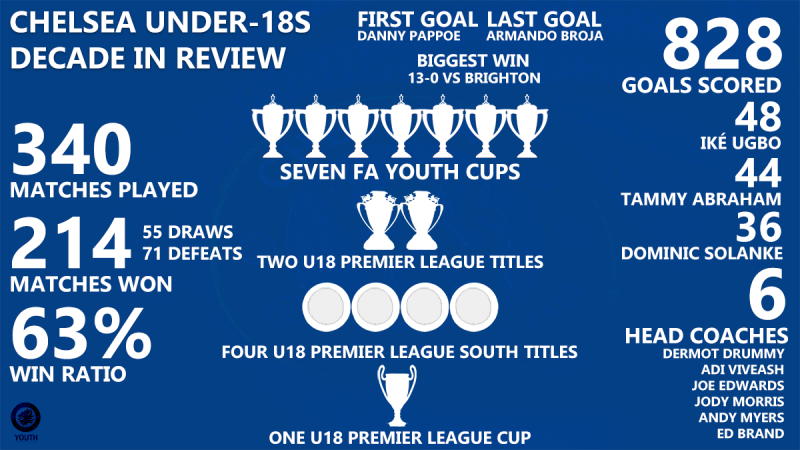