The more things change, the more they stay the same.

For the fourth time in six seasons, Chelsea and Manchester City will contest the FA Youth Cup Final, and in the two campaigns they didn’t square off in the showpiece occasion in 2018 and 2019, each racked up an additional Final appearance. You have to go back to 2011 to find the last time one of them didn’t reach the tournament’s conclusion, owing largely to Chelsea’s stupendous run of getting that far every single season except 2018-19, and there can be no doubt that these two clubs represent the future of the English game, particularly at international level.

Taking the 36 players named in Friday’s Semi Final matchday squads, 24 of them are England youth internationals, with another small handful having featured for the rest of the home nations or Ireland. The majority of those two dozen were reared by their clubs from the foundation phase of youth development and, while wider recruitment brought the cream of the crop to the club later on – particularly in City’s case – the theme is clear. These two finalists have provided England with more youth internationals than any other club in each of the last five years, and the influence on Gareth Southgate’s senior squad is increasingly clear.

Kieran Trippier, Ruben Loftus-Cheek, Tammy Abraham, Jack Cork, Dominic Solanke, Jadon Sancho, Nathaniel Chalobah, Declan Rice, Callum Hudson-Odoi, Mason Mount, Fikayo Tomori, Phil Foden, Reece James. One or two of them might pre-date a more modern rivalry but one-third of all debutants under the current England manager can claim to have been produced by Chelsea or Manchester City. The current England Under-21 pool of players adds another half-dozen more from Chelsea’s side, while City’s work is coming up fast on the outside at the younger levels, with eight of their own in the Under-20 pool alongside another smattering of Chelsea products.

Cutting a long story short, the players that take to the St George’s Park pitch on Monday night will do so in very familiar surroundings at the home of Three Lions football, but they will also do so knowing they will be frequent visitors in the years to come as the outstanding talents of the future. From a club perspective, Chelsea are aiming to bring home a trophy they won five times in a row between 2014 and 2018 and, in doing so, winning a record-equalling tenth title that would draw them level with Manchester United, who they vanquished on Friday night. City are chasing their third title and a first since 2008 (when they beat Chelsea) but, more importantly, a first in an era that saw them fall to Chelsea’s might three times in a row before stumbling on home soil against Liverpool last season*.

Last season comes with an asterisk because this is the belated completion of a 2019-20 Youth Cup that ought to have concluded back in April. A global pandemic meant a six-month hiatus and moving the last three fixtures to neutral ground, denying City home advantage as they had been drawn first in the new one-legged final format. The decision to do away with several decades of two-legged finals ahead of the 2018-19 season was controversial to say the least, and may or may not have had something to do with the fact that it proved extremely hard to overcome a team of Chelsea’s might over 180 minutes. Norwich City managed it in 2013 but, when the Blues machine really started to motor, they were able to turn first leg draws against City into wins in 2016 and 2017, before demolishing Arsenal home and away in 2018 at the height of their powers.

The new one-off format should have given the Citizens what they craved a year later when Chelsea had succumbed to Mason Greenwood’s talents early in the competition, as they hosted Liverpool at the City Football Academy with silverware at stake. Indeed, they were four minutes from getting everything they wanted before a former Sky Blue in Bobby Duncan equalised for the Reds, forcing a penalty shootout in which Cole Palmer’s miss proved decisive.

Palmer made his first-team debut for Pep Guardiola last week in the Champions League before returning to Under-18 duty as part of a formidable forward line under new youth team manager Carlos Vicens, who took over from Gareth Taylor this summer. On paper the combination of Palmer, Liam Delap (another recent first-team graduate), Morgan Rogers, James McAtee and Ben Knight is as strong as you’ll see at this level, and they have the prodigious Jayden Braaf returning to full fitness at just the right time too.

Capable of steamrolling anyone they want to, they haven’t quite done that on their way to the Final, but they’ve been pretty good anyway. Comfortable wins over Swansea, Aston Villa, Fulham and Burnley led them to a Semi Final against Blackburn, where the 4-0 final score didn’t entirely reflect the balance of the contest and owed much to the winners capitalising on late mistakes from weary Rovers defenders.

Indeed, for long stretches, Rovers were able to frustrate City, a theme that has come up time and again throughout their Youth Cup run. Swansea were only vanquished late on, Villa kept it close after conceding early, while Fulham and Burnley kept themselves alive until the end despite being massive underdogs. For all their firepower, City have struggled to put teams away, but a strong defensive record that has seen them concede just once along the way underpins their whole operation.

You can say the same about Chelsea who, for the second time in three campaigns, have reached the Final without conceding a goal at all. They have netted 18 without reply compared to City’s 11, with big wins against Huddersfield (4-0), Bradford (5-0) and Wolves (7-0) before 1-0 victories against Millwall and Manchester United. Both teams enjoyed home advantage all the way to the Semi Finals and didn’t face a team of the very highest calibre, although Fulham and Man Utd respectively did represent some of the very best competition available.

This will be a heavyweight contest in every way. Any notion of a physical advantage either team might have over 99% of opponents (and however misplaced those arguments are) disappears, and two extremely well-coached teams go head-to-head with individual ability just as likely to make the difference on the night. City are the very definition of a Guardiola-influenced team; 4-3-3 by design, but with plenty of flexibility within that shape for improvisation. They play through the thirds from defence, rely on guile and creativity in the middle of the pitch, and have outstanding attackers in the final third who combine physical and technical excellence, and who have each (Rogers, Delap and Palmer) played at first team level.

Chelsea’s success is built on an overwhelming defensive press that forces opponents into mistakes and allows them to get numbers into the opposition half out of possession ready to take advantage of turnovers of possession. They scored goals from those very scenarios in all three of their early-round wins and thoroughly dominated Man Utd in Friday’s Semi Final with a turbo-charged version of the press that displayed the hunger and determination to bring the trophy home to Cobham after spending a year away at Liverpool.

They’ve lost Armando Broja and Ian Maatsen to senior loans in between (while City have done the same with Lewis Fiorini) but, in Bryan Fiabema, they have a very capable replacement for goalscorer extraordinaire Broja. He added to Development Squad strikes against Arsenal and Liverpool with the winner against United on Friday and clearly fancies netting against the biggest clubs in England. He along with Marcel Lewis and Myles Peart-Harris led the press so well on Friday, and if Peart-Harris is unable to shake a knee injury that forced him off after an hour, Chelsea will be poorer for his absence. 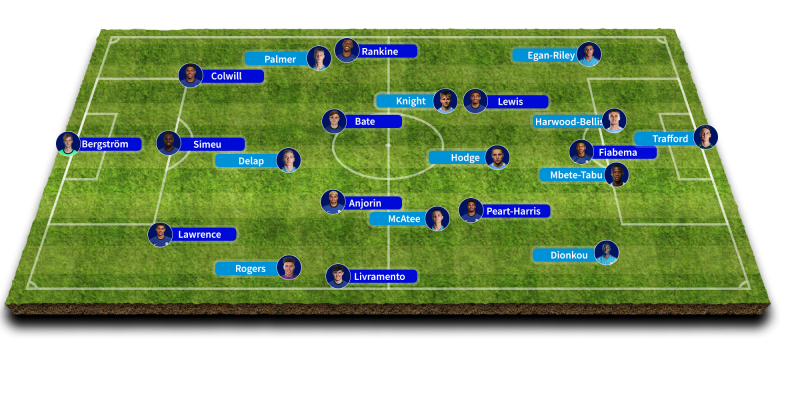 At the height of their mid-decade trilogy, Chelsea dealt with the potent threat of Sancho, Foden, Brahim Diaz and Lukas Nmecha with a robust back three featuring James, Trevoh Chalobah and Marc Guehi, with strong work from Dujon Sterling at wing-back helping to keep Sancho under control. A similar approach might be in effect this time around too as Henry Lawrence, Dynel Simeu and Levi Colwill marshal a defence that is yet to be breached in this run, with Tino Livramento reprising Sterling’s role as the Duracell wing-back who dominates up and down the full length of the pitch.

Look for City to try to control the tempo of the game with possession, beating Chelsea’s press and hoping to make more of their opportunities than United did on Friday. Chelsea will seek to disrupt that play and capitalise on their mistakes, but may not be as ferocious with their work off the ball for knowing the calibre of player they’re up against. If City have a weakness it’s in wide defensive areas and in between the lines between the back four and holding midfielder Joe Hodge; areas in which Livramento, Lewis and captain Tino Anjorin can have some joy.

This will be a match in which the team will set you up to win, and the individuals will decide who gets their hands on the trophy. It will be among the highest-quality youth matches in England for a generation, and you can watch it on BT Sport in the UK from 7pm on Monday night, while you can find all the usual updates and coverage @chelseayouth on Twitter as ever. It promises to be unmissable.