Chelsea’s strongest Under-18 team of the season led the way to a 3-0 victory over Ipswich Town on Saturday morning ahead of Wednesday’s FA Youth Cup Quarter Final.

First half goals from Nathaniel Chalobah and Anton Rodgers, after an own goal had given the Blues the lead, ensured three more points for Dermot Drummy’s men, before attentions turned to Watford in the second half.

Taking the opportunity to try out some things in advance of the last eight tie at Stamford Bridge, Drummy gave starts to Daniel Pappoe, Aziz Deen-Conteh and Billy Clifford, all more often seen in the reserve ranks.

George Saville returned from a back problem, whilst there was a first start in the Under-18s for Tomas Kalas. Amongst the substitutes were defenders Rohan Ince and Archange Nkumu, both returning after being sidelined for some time.

In heavy rain, the match got underway at breakneck pace and didn’t let up for the best part of half an hour. Playing in a narrow midfield shape with Clifford seemingly afforded the freedom to roam, Chelsea were confident in possession and soon began to make things happen. 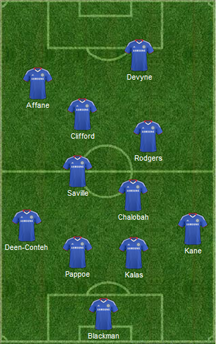 They had the lead inside ten minutes. A free kick out on the left was swung inwards by Clifford, and it flicked off the head of a defender, flying past goalkeeper Cody Cropper and into the back of the net.

It could, and perhaps should have been two a few minutes later. Chalobah found space in the box, but Cropper came out to smother his effort. The ball ran free, but neither Anton Rodgers nor Bobby Devyne could force the ball over the line.

They didn’t have very long to wait before extending the advantage, and it was certainly worth the slight delay.

Nice approach play on the edge of the area worked the ball to Chalobah. The schoolboy took a touch to set himself before curling a delicious effort into the top corner, leaving Cropper with no chance.

It was a finish which encapsulated the remarkable qualities the defender possesses, and was his second goal of the week, having netter for the reserves at Aston Villa on Monday.

Ipswich had their moments at the other end, most notably when Josh Carson’s lob had Jamal Blackman beaten, but it landed on top of the net. For the most part, however, it was a dominant performance by the home team.

Clifford, pulling the strings as much as Chalobah was deeper, drew a smart save from the visiting American goalkeeper, whilst Devyne flashed an effort across the face of goal.

Both full-backs were getting forward to great effect, with Ipswich’s wingers failing to track them back into defensive positions. Their delivery from wide was often good, but lacked a man to finish it off inside the box.

Blackman kept himself focused at the other end and was down well to turn away a tricky free kick, but the third goal of the half came went the same way as the other two as Chelsea put the game to rest.

More tidy passing in midfield released Rodgers, who found himself one on one with Cropper. The first shot was saved, but fortune favoured the Blues man, who picked up the loose ball and tapped in the rebound.

With such a strong ascendancy at the break, Drummy was able rest Chalobah and Todd Kane with midweek in mind, bringing Ben Sampayo and Rohan Ince off the bench.

Nkumu was soon to join them to allow Devyne a breather, and with no recognised strikers on the pitch, Ince was pressed into an unfamiliar role leading the line in attack.

Perhaps unsurprisingly, Chelsea taking their foot off the gas allowed Ipswich to salvage some pride, and to their credit the Tractor Boys came out intent on playing their way back into the game.

Two efforts from the right side of the box missed by fine margins, before one from the left courtesy of Josh Meekings clipped the crossbar on its way over.

Chelsea looked disjointed as a result of the lack of natural forwards on the pitch and it manifested itself in their sloppiest spell of the match. Ipswich took heart and played heavily in Chelsea’s half, but were unable to beat Blackman.

However, whilst Ince is no striker, he deserves every credit for giving everything he had on his return from a lengthy spell injured, and was almost rewarded later in the match.

He beat Jide Maduako to a through ball and rounded Cropper. Keeping composed, he squared the ball to Saville, but the shot was blocked on the line.

Seconds earlier, Saville had bundled his way through on goal but ran out of steam at the crucial moment, losing possession.

Then, taking a cross from Rodgers on his chest, Ince displayed great agility to turn and volley towards goal with his weaker left foot. Cropper saved but couldn’t hold onto it, doing just enough to force Clifford into skying the rebound.

Chelsea reduced themselves to ten men inside the final twenty minutes, with Deen-Conteh removed as what was presumably a precaution. He headed to the bench after joining a surreal counter attack led by Ince and Kalas following an Ipswich corner.

With Amin Affane at left-back, the home team dropped deeper for the final moments, but still found time to have a fourth ruled out for a foul, as Pappoe collided with Cropper from Affane’s free kick.

Blackman made two further saves to earn a deserved clean sheet after a spectacular outing at Southampton last week, and after some late handbags involving Clifford and Ipswich’s right-back, the referee blew time on proceedings.

Chelsea can be happy with their first half display, which was flowing, confident, and dominant in all phases.

They should also take credit from their second half showing, which was more based on attrition as their opponents fought back well and had an extra man for some time, and the spirit and work ethic showed throughout will be a big positive ahead of Watford in four days time.