2010-11 hasn’t been the best of seasons for both Chelsea and Portsmouth as far as academy league results have been concerned.

The two lowest placed clubs in Group A met on Saturday morning at Cobham, with Chelsea coming out on top with a 3-0 victory courtesy of goals from Walter Figueira, Bobby Devyne, and Danny Stenning.

Figueira kept his place after scoring the winner in stoppage time last week against Charlton, with the only change in personnel coming in the form of trialist Henrik Breimyr, who replaced Ismail Seremba.

The 17 year-old Norwegian has previously spent time on the books of Reading and Fulham, and has most recently impressed playing for Aldershot. 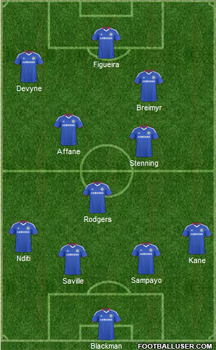 Portsmouth started in energetic fashion, pressing Chelsea in possession in an attempt to forge an early advantage. For a team who have picked up just four points all season, they seemed to have enough about them to mount a challenge.

However, Chelsea looked largely comfortable in possession and almost had the ball in the back of the net inside a few minutes. Breimyr played Stenning into a pocket of space, and he in turn found Devyne.

A lobbed effort beat the goalkeeper but the lack of pace on the shot allowed the defender to get back and clear the ball from underneath his own crossbar.

Nonetheless, it signified the way the game was going to unfold. Playing high up the pitch and moving the ball around confidently, Chelsea sensed this was a game which was there for the taking.

Figueira saw an effort correctly ruled out for offside after Breimyr’s knockdown, and saw a beautifully struck volley from outside the box land just wide, but at the third time of asking the schoolboy was able to open the scoring.

Adam Nditi advanced inside from the left and, allowed space, he took on a shot. It fizzed across the face of goal and Figueira was on hand to divert it into the bottom corner.

It didn’t take long for the lead to be doubled. Following a foul on Stenning on the very edge of the area, no fewer than five blue shirted youngsters were keen to take the set piece.

Perhaps the most unlikely of the group struck the ball, but Devyne’s effort was crisp and flew into the back of the net to the goalkeeper’s side of the wall.

Much of the first half was wave after wave of Chelsea attack, and there could easily have been more goalscoring action. Figueira saw one bundled off the line after less than convincing goalkeeping, whilst Rodgers curled a set piece mere feet wide of the target.

Late in the first period Portsmouth did manage to create one or two decent openings, but they were unable to force Jamal Blackman into a save on either occasion.

To their credit, however, they came out for the second half looking a much better side, and began to look more threatening in the attacking third. Whilst Blackman was far from overworked, he and his defence were forced to be on their toes to put up a resistance against a side playing with renewed vigour.

Then the referee took centre stage.

Many academy matches pass by without incident; and the vast majority without cards being issued. A stern word from a referee who understands the level at which the boys are playing usually suffices.

Today was an exception to that particular ‘rule’. In the space of no more than fifteen minutes, both sides picked up three yellow cards apiece, and Portsmouth were reduced to ten men.

Saville, Figueira and Affane all had their names taken, whilst the dismissal came for a pair of bookings for the visitors’ number eleven.

Having already been cautioned for off the ball activity at a corner, he was involved in a collision with Anton Rodgers. The Chelsea midfielder went into the challenge to clear the ball for a throw, and the challenge was most certainly there to be won.

Both players arrived at the same time, and Rodgers bounced off the bigger man with a forceful impact. The referee decided it was dangerous play, and promptly, but perhaps harshly, produced a red card.

Away from the sideshow, Nditi had a glorious opening to put a gloss on the scoreline but completely missed his kick with the goal gaping, and Affane drew a tidy save from a fiercely struck long range free kick.

In a half short on quality, however, Stenning capped the win with a moment of excellent technical execution. Striking a ball laid off by Devyne, he sliced across it first time with his weaker left foot, allowing the ball to bend away from the goalkeeper and into the top corner from the edge of the box.

After a heavy reverse at Fulham to start the year’s academy action, Dermot Drummy’s boys have bounced back in impressive fashion to pick up back to back home wins, each with a clean sheet to boot.

That comes without regular centre-back Archange Nkumu, and the likes of Nathaniel Chalobah, amongst a number of players who are currently injured.

It means younger players come into the side, and others – like George Saville – play in different positions, but the depth on display is impressive, as was today’s team performance. A professional, confident win.