Chelsea’s bid to be European Under-19 Champions fell at the last hurdle on Monday evening as they lost 2-0 to Aston Villa in the NextGen Series Final.

Despite dominating the first half, two penalties from Villa’s Graham Burke saw them claim the glory and follow Internazionale into the competition’s history books. Alex Kiwomya was sent off late on for a second bookable offence to compound an ultimately frustrating day for the Blues.

Dermot Drummy was deprived of the services of Adam Nditi through injury but was able to include Nathan Aké after the Dutchman missed Friday’s Semi Final against Arsenal due to potential first-team commitments. 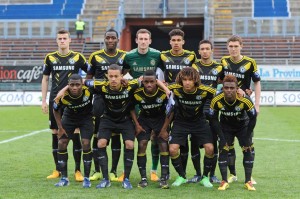 Former Chelsea defender Tony McAndrew, the Aston Villa coach, also made one change from the team which got through to the Final by adding the more industrious presence of Riccardo Calder to his midfield in place of the slighter and younger Australian Jordan Lyden. Burke continued alongside Callum Robinson in attack with top scorer Michael Drennan out injured.

Robinson was lively early on and had two chances in the first five minutes but neither of them were dangerous enough to worry goalkeeper Mitchell Beeney, and it was his opposite number Bradley Watkins who was the busier stopper during the first 45 minutes.

He was into action inside 40 seconds, coming off his line quickly to smother Kiwomya’s shot after Baker had released him through the middle. Minutes later he was down well to deny Feruz after Boga’s enterprising play on the edge of the box had fashioned the opportunity.

Chelsea were being afforded time and space to play their game in the middle of the pitch and looked at every opportunity to utilise the pace of Kiwomya out on the right.

Perhaps the best chance of the opening period arrived with just under twenty minutes on the clock when Baker played a quite exquisite through-ball covering 50 yards to spring the England Under-17 man through on goal, but with the ball bobbling on a problematic playing surface, he screwed his shot wide.

It was almost one-way traffic for long spells and Watkins had to be on top of his game to keep Villa on terms. He came into the game in fine form after a strong performance against Sporting Lisbon on Friday and carried on where he left off, making further saves from Feruz and Kiwomya before half an hour had been played.

Villa weren’t entirely out of things though and certainly possessed the talent to make an impact on the game. They showed as much when Calder burst onto the ball around the back after a quick move and drew a save from Beeney which created a rebound for Robinson, but the young forward couldn’t locate the ball quickly enough to take advantage, and Chelsea scrambled clear. 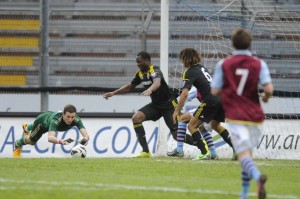 Baker had two more shots miss the target before the break but it was Aké who came closest of all to breaking the deadlock when Kiwomya played him in with a blind-side pass late in the half. The Dutchman got his shot away from just outside the six yard box but a combination of Watkins and Calder got the ball away with inches to spare to keep the claret and blue team on terms heading into the dressing rooms.

Chelsea’s profligacy has, at times in recent years at this level, come back to cost them and with three second half minutes played, it threatened to again. Robinson got space in the box to run at Davey and after twisting and turning, he got the Scottish Under-19 defender to go to ground and drew the foul.

Referee Daniele Minelli pointed to the spot and as he did on Friday, Burke converted from the spot to give Aston Villa the lead. 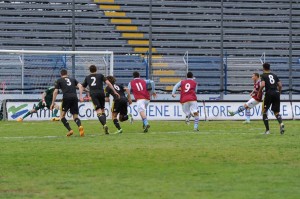 Carruthers followed that with a wayward shot from eighteen yards out before Kiwomya was booked at the other end for simulation having gone to ground some considerable time after Lewis Kinsella had actually fouled him.

Chelsea began to struggle to break down a now well-organised opponent which was as content as ever to play out to the dangerous Robinson whilst preserving their lead. Baker skied another shot wide from the edge of the area after another cutback from Kiwomya as they otherwise looked short of a much-needed creative spark.

Villa attacked in spells, keen not to over-commit, but they were asking Beeney to work just as much – if not more – as Chelsea were Watkins. Jack Grealish forced one smart stop at the near post before Josh Barton’s long shot demanded a more agile save.

Drummy shuffled his pack by introducing the dynamic schoolboy winger Connor Hunte for the tiring Loftus-Cheek; a move which meant Baker dropping back into his favoured central role alongside Aké.

Charlie Colkett then replaced Davey in a move which saw the Blues go to three at the back in a bid to inject a greater attacking impetus and the numbers duly flooded forward with only fifteen minutes remaining. Yet for all the increased attacking personnel, there were no chances to speak of as the minutes ticked away.

Watkins claimed a couple of late corners before things really went south for Chelsea in the final minute. First, Kiwomya received his marching orders for a late foul on Kinsella which earned him a second yellow card, and then deep into stoppage time a second penalty was awarded for Pappoe’s clumsy foul on Barton.

Burke, who was lucky not to have been sent off for a reckless lunge on Baker ten minutes earlier, converted for the second time to crown Aston Villa Under-19 Champions of Europe.