Chuba Akpom had given Arsenal an early lead but a spell of three goals in ten second half minutes gave the Blues a commanding lead as Islam Feruz, Lewis Baker and Jeremie Boga all struck in quick succession. Arsenal hauled themselves back into the game in the final minutes as Akpom grabbed a second before Serge Gnabry tied the scorelines, but Baker’s winner four minutes from the end of extra time saw Chelsea home.

Mitchell Beeney replaced Blackman in goal, whilst the experienced head of Daniel Pappoe was required with Aké unavailable. Drummy was, however, able to call upon the services of both Alex Kiwomya and Ruben Loftus-Cheek despite them being on international duty yesterday afternoon. 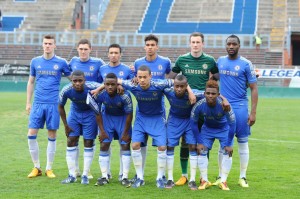 Arsenal were unchanged from the team which eliminated CSKA Moscow on Monday night, meaning starts for Gnabry and Nico Yennaris – who both have first team experience – as well as the talented England Under-19 forward Akpom.

The playing surface at the Stadio Giuseppe Sinigaglia was woeful to say the least but both sides faced the same struggles and Arsenal fared much better with their play early on. They were prepared to alter their approach to suit their conditions and were keen to press Chelsea players to force mistakes.

They did just this in the opening five minutes as Beeney mis-placed a short pass from the back straight to the feet of the dangerous winger Gnabry. The big stopper was however able to make amends for his mistake by denying the German from close range and then again from a follow-up attempt.

The liveliest player in blue for much of the first half was Islam Feruz, who was busying himself by bothering Arsenal defenders Sead Hajrovic and Isaac Hayden relentlessly. He robbed the latter of the ball before firing just wide of Iliev’s left post from some thirty yards out to send out his own message.

Whilst Feruz was ploughing something of a lone furrow for a Chelsea side which struggled to get into the game, Arsenal were playing more as a team and put together a lovely move to take the lead after a quarter of an hour. Gnabry dropped deep to find space in which to operate before releasing Hector Bellerin down the right, and the Spanish defender squared across the face of goal for Akpom to tap into an open goal.

Having secured a lead, Terry Burton’s men cooled the intensity of their approach in order to conserve themselves for another bout of pressing later in the game, and it allowed Chelsea to start linking their play into a cohesive strategy. Jeremie Boga was soon finding his feet with the ball bobbling around at will and began to drive at the defence in his usual languid style, and earned a series of free kicks for clumsy tackles.

One such set piece allowed captain Baker to try his luck from long range but whilst he caught his effort superbly, the ball just didn’t bend enough to come back inside the far post.

There was a booking apiece for Andreas Christensen and Isaac Hayden on either team as the half drew towards its conclusion, and half chances remained the order of the day. Beeney saved Ebecilio’s tame strike whilst Connor Hunte, on for an injured Adam Nditi, strayed just offside in the closing moments of the opening 45 minutes to spoil a move which promised much as Boga, Kiwomya and Feruz all sprinted forwards with enthusiasm.

Immediately following the restart there were clear signs of a change in style from Chelsea as Alex Davey looked to play some longer balls into attack, but the equaliser, when at arrived just seven minutes into the second period, came about after a concerted and considerable spell of ball retention in the Arsenal half.

Substitute Hunte eventually went surging down the left, opening up Bellerin before cutting the ball back to the wide open Loftus-Cheek. He was denied the chance to shoot though as Gnabry pushed him over from behind.

The usually reliably Baker saw his spot kick saved superbly by the Macedonian Iliev, but Feruz showed lightning quick reactions to pounce on the rebound and slot home from a tight angle. 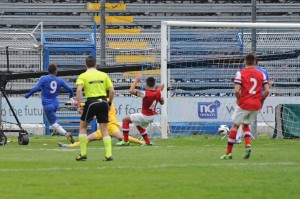 With parity restored, the game took on a more stretched feel than at any previous point as both teams flooded forward with speed and in numbers. Feruz dragged a shot wide when looking to score his second, whilst Kyle Ebecilio and Kris Olsson will have wanted to do much better with opportunities from the edge of the box.

Their profligacy will have played even greater on their minds moments later though as a freak goal from Baker gave Chelsea the lead on the hour mark. Picking the ball up almost forty yards from goal, the influential midfielder took a few touches forward and decided to shoot. Iliev appeared to have had it covered but turned from penalty hero to goalkeeping zero as a flat bounce took the ball under him and into the back of the net.

Having gone ahead, there was clear daylight between the teams two minutes later when Boga added a third. Kiwomya toyed with Martin Angha in the same way Hunte had Bellerin earlier, going past him with devastating pace, and his fiercely-struck cross was turned home by the Frenchman Boga at the far post.

Arsenal looked shell shocked by the sudden swing in play but had enough about them to know that their response would have to be quick and effective. Industrious play by Akpom fashioned a chance for Olsson but the Swede’s shot was always bending wide of the target.

Fresh legs followed from both teams with Brandon Ormonde-Ottewill and Zak Ansah on for Arsenal whilst Tika Musonda entered in place of the impressive Loftus-Cheek and Jeremie Boga was given a breather in order for John Swift to get a deserved run out.

The impressive Gnabry, having moved to the right as a result of the changes, soon showed a quick pair of heels to Kevin Wright before playing the ball into an excellent area which, unfortunately for him, had not been read by any of his team-mates. Christensen then did just enough to prevent Akpom from getting a close-range shot away as Arsenal pressed for a way back into the game.

With three minutes remaining, the grandstand finish was set up as Akpom scored his second. Much like his opening goal, he converted from close range, this time after Ansah had done well to turn Pappoe and get in behind. Chelsea sank further and further into their own half and in the final minute of play Gnabry finally made it count, cutting inside and firing into the top corner with his weaker left foot to make it 3-3. 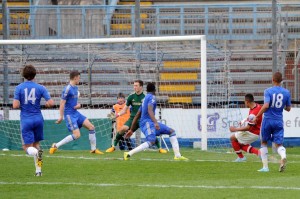 Extra Time duly followed and opened up with a glorious opening for Kiwomya straight off the bat. The winger found himself running clear on goal with Feruz alongside him, but chose to shoot instead of pass and flicked his effort wide of the target.

He soon had another sight of goal on his left side but failed to pull the trigger, whilst in between there was a chance for Feruz from an aerial situation but his lack of height served against him as he couldn’t quite grow enough to meet Baker’s cross.

Arsenal made the game’s final substitution at the turnaround in extra time, giving schoolboy Ainsley Maitland-Niles a run-out for the ineffective Ebecilio, but Chelsea continued to make the better of the going in the additional period, at least as far as clear-cut chances were concerned, and although Arsenal had the territorial advantage for a decent spell, the game’s seventh and decisive goal fell to Chelsea with four minutes left.

Once again, the wide play proved influential as Kiwomya and then especially Swift did well on the right, with the latter twisting and turning to find a yard to cross. He did just that, and Baker met the cross emphatically from four yards out for 4-3. 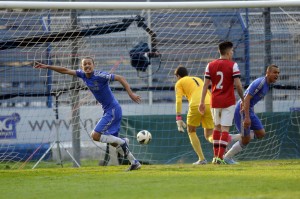 There was scarcely time for Arsenal to muster a response, especially with weary legs, and thus the Blues advanced into Monday’s Final at the same venue, where they will play Sporting Lisbon or Aston Villa.