A record-breaking run is only properly committed to the history books when it ends and so, a year on from Chelsea’s FA Youth Cup Third Round exit at the hands of Manchester United, their historic five-year reign as winners of the country’s most prestigious youth-age competition, there has been plenty of time to reflect on just how incredible a streak it was.

It equaled United’s own five-year campaign of excellence in the Youth Cup’s nascent years some sixty years earlier; an era of football far different by comparison, one in which Chelsea themselves ended up with back-to-back triumphs of their own in 1960 and 1961. That team produced the likes of Peter Bonetti, Ron and Allan Harris and Terry Venables for the first team at Stamford Bridge, while the modern generation has already spawned Ruben Loftus-Cheek, Tammy Abraham, Mason Mount, Fikayo Tomori, Callum Hudson-Odoi and Reece James as Frank Lampard builds for the future from within.

Hudson-Odoi was eligible to play in last year’s edition of the Youth Cup, as was Ethan Ampadu but, with both having moved on to bigger and better things, the next generation were handed the opportunity to pick up the baton and carry on a growing legacy at the club. That they were beaten by a United team that has seen seven of the starting eleven go on to play for Ole Gunner Solskjaer’s first team since is testament to the sort of talent needed to bring their time at the top to an end. Mason Greenwood’s hat-trick that night set United on their way, and he’s now the club’s second-top scorer this term, while Brandon Williams has emerged in his own right at full-back.

James Garner, Di’Shon Bernard, Dylan Levitt, Ethan Galbraith and D’Mani Mellor have pushed on in the Europa League and, while Chelsea have been able to hand debuts to Billy Gilmour, Ian Maatsen and Tino Anjorin from the same match, the depth of experience ultimately told. Andy Myers’ team eventually lost by the odd goal in seven and will have looked back with some regret at the manner in which they conceded some of those goals, while ruing a lack of cutting edge in attack.

They return for another crack at reclaiming what they believe is their trophy with a new coach, a new-look squad, and with every chance of returning to their rightful place at the top of the academy tree in England. Ed Brand, who captained the youth team in their 2003 and 2004 fixtures, leads an Under-18 team that are unbeaten so far this season, winning 12 of their 14 matches to date, and are fresh off the back of a resounding 8-0 win at Swansea City that ensured they top the Under-18 Premier League table at Christmas.

This is a squad that knows how to win. The experienced second-years like Anjorin and Maatsen are joined by a group of first-year scholars who have quite a pedigree themselves. They clinched the Under-16 Premier League Cup back in April with a 5-2 thumping of Arsenal, having seen off both Tottenham and Manchester City en route, and previously won a domestic treble at Under-15 level. Serial winners, some among the group haven’t tasted defeat in a meaningful match at club level since the middle of last season. 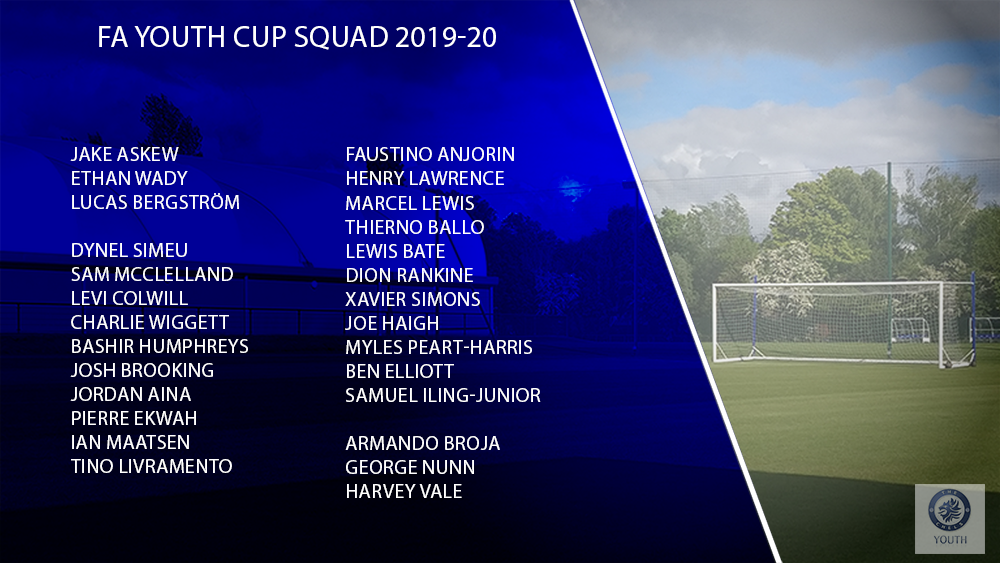 There’s depth in abundance. Jake Askew should start in goal, challenged by Ethan Wady, while Lucas Bergström works to recover from a long-term knee injury. Brand has favoured a 3-4-3 formation so far this season, in contrast to Myers’ 4-2-3-1 at Development Squad level where many of this year’s squad have plied their trade, but the education and development programme means everyone has had plenty of exposure to different formations, shapes and approaches and will be comfortable moving between them.

Sam McClelland, Dynel Simeu and Levi Colwill figure to fill the starting berths in central defence, at least to begin with, but Charlie Wiggett, Pierre Ekwah and Bashir Humphreys will have plenty to say about that as the season goes on. McClelland prefers to anchor the group from the middle, his old-school aggressive approach meshes well with the more athletic demands placed on the outside CBs; Simeu and Colwill will often find themselves in advanced areas in a manner not too dissimilar to the ‘overlapping centre-backs’ made famous lately by Sheffield United (but is something Chelsea have done at this level for a while themselves).

Where Chelsea have really found their difference-makers in the past five years, however, is at wing-back. In a seminal opinion piece from 2016, the esteemed Samuel King wrote the following about the players required by the Blues in those positions:

“If the full-backs in the academy teams are not two of the fastest and most comfortable players on the ball then the structure of the team breaks down as the ball can’t be moved subtly from defence into midfield. Once there you don’t effectively have four deep lying midfielders and once the ball’s in the attacking third you don’t have two high quality auxiliary wingers.”

From Fankaty Dabo and Jay Dasilva to Ola Aina and Dujon Sterling, through to Juan Castillo and Tariq Lamptey and a nod of the head towards Reece James (who preferred a RCB role in his Youth Cup vintage), Chelsea have simply overwhelmed their opponents with the dynamic production found at wing-back. Brand can call upon the services of Maatsen, Henry Lawrence, Valentino Livramento, Dion Rankine, James Clark, Sam Iling-Junior and Jordan Aina this time around, safe in the knowledge that any or all of them can raise their game to the standards set by their predecessors.

In the middle of the park, Lewis Bate and Xavier Simons have struck up a brilliant partnership that must be reprised against Huddersfield Town on Wednesday. They complement each other perfectly; Bate on the left, Simons the right, both are prodigious at recovering possession in their own ways, they have an expansive passing range with good decision-making, and between them they’ve combined for four goals and eleven assists this season.

Anjorin is assured of his place in the team, fitness allowing, and will captain the squad as the most experienced and talented player available to Brand this time around. His 2019-20 season has been a little stop-start due to one or two injury niggles, but his involvement in eight goals in eleven matches this season saw him make his first-team bow under Lampard against Grimsby back in September, and there are few players of his calibre around. He scored seven times in eight matches at Under-18 level last season, is a considerably better player a year on, and is entirely capable of taking over a match on his own.

Whether it’s Thierno Ballo, Joe Haigh, Marcel Lewis, Ben Elliott or Myles Peart-Harris that join him in attacking areas, 3-4-3 or 4-2-3-1, Brand has a full arsenal of weapons at his disposal, and they’ll be tasked with supporting either Armando Broja or George Nunn up front. Broja has led the way with 13 goals this term and leads the line well, while Nunn – who enjoyed a better 18-19 than Broja by comparison – has quietly gone about his business this time around with five goals of his own, and an increased presence at Under-23 level. 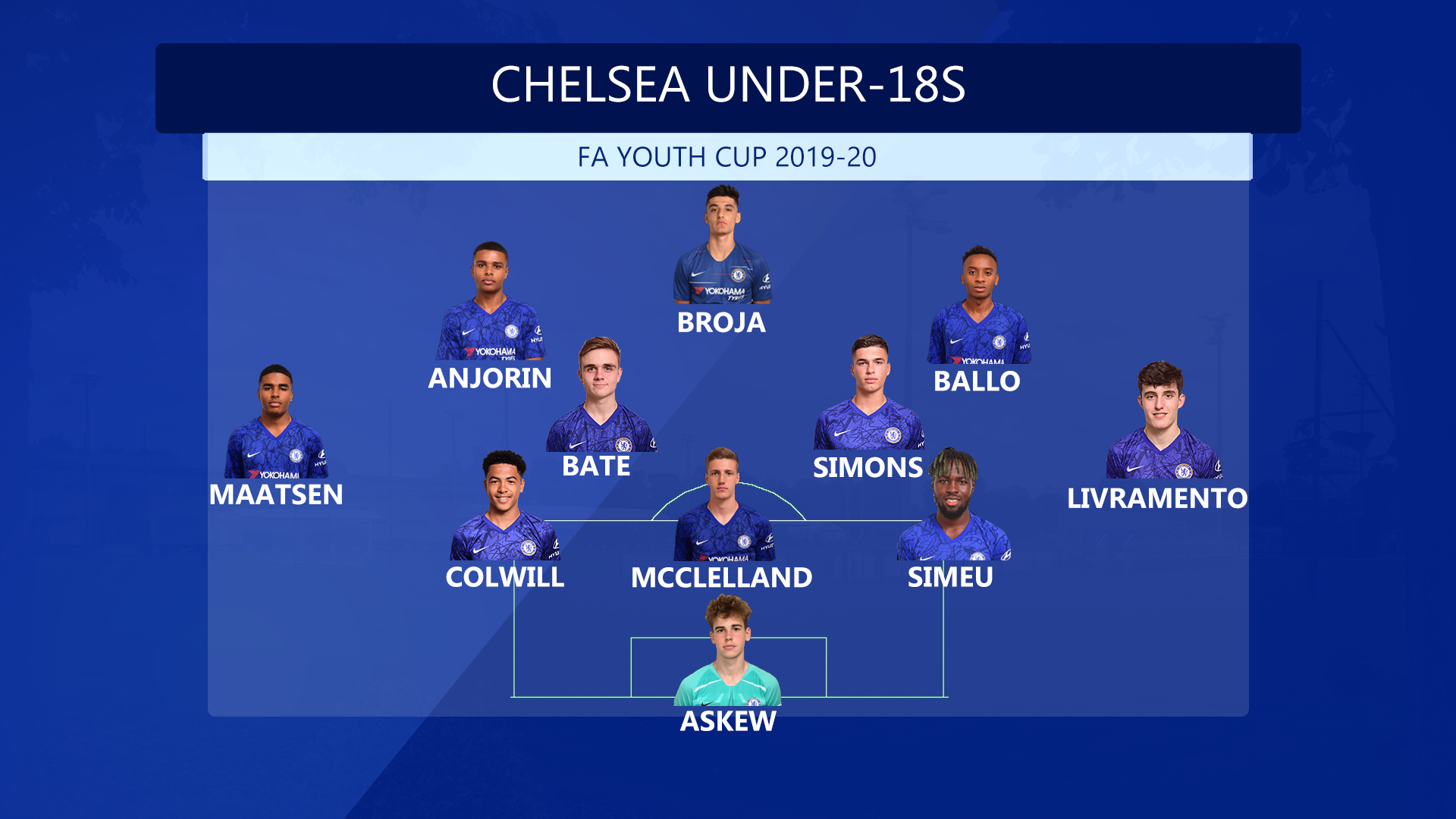 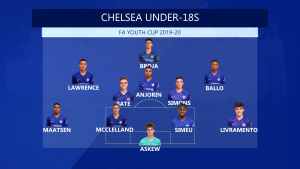 They’ll kick off against Huddersfield Town confident of victory against a club that voluntarily dropped down to Category Three level eighteen months ago, a decision that saw them dramatically scale back their academy programme. There is talent there, notably prolific forward Kian Harratt, but this is a team that lost consecutive league matches in November to Burton Albion, Notts County and Scunthorpe. Chelsea won’t look too far ahead, but with Bradford City at home lying in wait for the winners, they will know they’re strongly fancied to come through the early stages unscathed.

This is why we play the game, though, and it’s why Chelsea’s domination of the FA Youth Cup was so impressive. Everyone is just ninety minutes from elimination and anyone can have a bad day. Those have been few and far between for the Blues in this decade, however, and they’ll be ready to show up at Kingsmeadow on Wednesday ready for work. Kickoff is at 7pm, tickets will be available from the ticket office on the day, but there are no facilities to pay on the door, so queues are expected. Please try to join the boys as they embark on what will hopefully be another epic adventure.