Saturday (November 28th) sees the return of the FA Youth Cup for Chelsea as they enter the 2020-21 edition at the Third Round stage. Here’s everything you need to know for this season.

Chelsea are quite good in the Youth Cup, right?
You could say that. Their nine competition wins place them second all-time behind Manchester United and they dominated much of the last decade, reaching nine finals since 2010 and winning seven of them, as the likes of Tammy Abraham, Mason Mount, Reece James, Callum Hudson-Odoi, Ruben Loftus-Cheek and so many others came to national attention for the first time. Incredibly, they have only failed to reach the Semi Finals once since 2009; Mason Greenwood’s hat-trick in December 2018 ending their challenge in the Third Round that season.

What happened last season?
‘Last season’ actually finished at the start of November, when the 19-20 edition came to a belated conclusion on neutral ground at St George’s Park. Once again, the young Blues were in the showpiece occasion, having seen off Huddersfield Town, Bradford City, Wolves, Millwall and Man Utd without conceding a single goal, but they weren’t to get their hands on the prestigious trophy as they lost 3-2 to Manchester City in a pulsating final.

Who do they play this weekend?
Barnsley are the visitors to Kingsmeadow on Saturday; the Tykes have won four and drawn two of their eight Under-18 league matches this season and have a well-rounded group of players who are capable of impressing. Look out for Kareem Hassan-Smith on the right, Joe Ackroyd in midfield, and Aiden Marsh in attack.

The two clubs have met in the Youth Cup in relatively recent history too. In February 2013, Adi Viveash’s boys won 3-0 against the Yorkshiremen at Staines Town in Round Five, with Alex Kiwomya’s brace following Lewis Baker’s opening goal. Andreas Christensen, Jeremie Boga and Nathan Aké also played, while back in 2011 there was another fifth-round win as Josh McEachran and Nathaniel Chalobah scored to see off John Stones and friends at Stamford Bridge.

Which players return from last year’s team?
The majority of Ed Brand’s valiant runners-up against Manchester City are eligible to return for this season, ensuring a strong and talented core to the squad as there usually is. Lucas Bergström, Lewis Bate, Levi Colwill, Ben Elliott, Valentino Livramento, Myles Peart-Harris, Dion Rankine and Bryan Fiabema all featured in the Final, while fellow second-years Joe Haigh, Bashir Humphreys, Charlie Wiggett, Xavier Simons and Josh Brooking will be hoping to force their way into contention form and fitness permitting. Simons in particular will be one to watch when back from injury as he joined Bate in the starting midfield for every round until lockdown intervened back in March, and brings an aggression and dynamism to the team that hasn’t always been there without him. Recent knee surgery was successful and rehab will begin shortly.

Who should we look out for from the newcomers?
Jude Soonsup-Bell has started the 20-21 season in terrific form and he already has a dozen goals to his name for the Under-18s in the league this term, including eight in his last three starts. He’ll compete with Fiabema for a starting place but Brand could opt to start them both, as he did on the opening day of the season against West Ham, a match in which both scored.

Harvey Vale has been very impressive too with five goals and four assists from a creative attacking midfield role, and both he and Soonsup-Bell saw playing time at St George’s Park earlier this month. Elsewhere, Charlie Webster is an elegant and confident midfielder who could quite easily work alongside Bate in midfield, controlling and creating from deep, while Silko Thomas has caught the eye with quality wide play that saw him earn an England Under-17 call-up this term.

Schoolboys Lewis Hall, Ronnie Stutter, Brodi Hughes and Leo Castledine are eligible for the first time and have forced their way into Under-18 contention already; they each bring something different to the table and could be wildcards if the situation demands it.

What sort of team are we likely to see then?
The team against Barnsley might not necessarily reflect the ‘strongest’ team, if such a team exists, but the depth available to Brand is best represented in a 3-4-2-1 shape the team has used since the start of October and, indeed, for most of the last few years. It assumes seniority by age and experience, but you might well see Vale play instead of Haigh or Webster alongside Bate until Simons is back, for example. These players are versatile and dynamic enough that they can fit into several different potential selections. 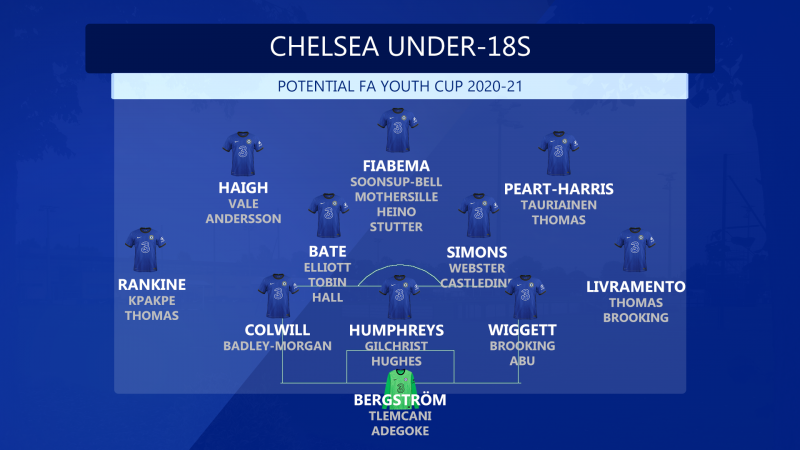 Where can we watch?
The match comes just too soon for potential fan attendance under recent government announcements and will be played behind closed doors at Kingsmeadow. It kicks off at 2pm UK time and can be watched live on Chelseafc.com and the Fifth Stand app. Live updates will be provided throughout on twitter @chelseayouth.